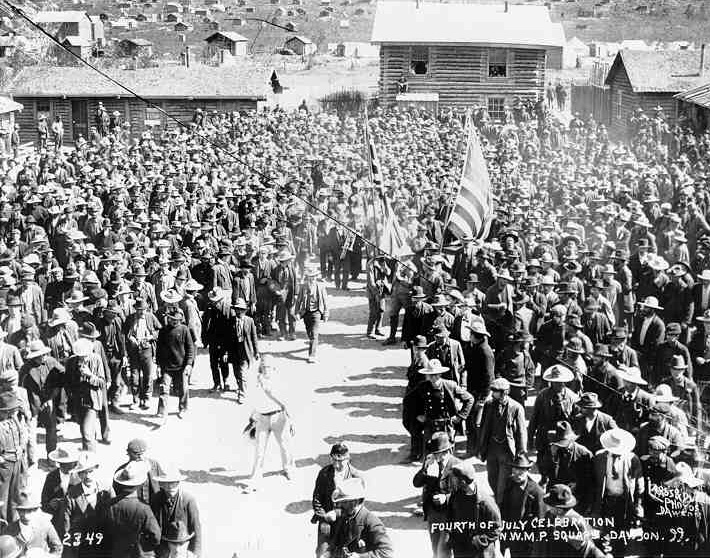 Americans celebrating the fourth of July in Dawson, Canada in 1900. Two years earlier, a far more spontaneous demonstration shook the town. A little after midnight on July 4, 1898, as the Americans began to realize what day it was, many began firing off their guns in celebration until most of the town was up and in the streets, whooping and hollering. The poor dogs in Dawson, terrified by the noise and activity, ran pell-mell through the streets, crashing into each other, people and horses.
Photo courtesy of Special Collections Division, University of Washington Libraries, Larss & Ducloss 86

At the height of the gold rush boom, most of Dawson's population was American-born. For those now living so far from home, getting to the gold fields may have seemed easy compared to getting their mail. Both the Canadian and the U.S. government were caught off guard by the speed and volume of the stampede. During the summer, mail could be carried by boat along the Yukon from St. Michael's, Alaska, but winter mail was brought up from Skagway, across the pass and into Dawson by dog sled. First class mail had the best chance of getting through, especially during winter months. Everything else was left for summer steamships.

Citizens occasionally hired individual carriers to carry the mail during the winter, but they were not always reliable. In April 1898, word reached Dawson that one carrier had used the letters he was hired to transport to "kindle his camp fires."

For those who remained in the Klondike, gold fever dimmed, but it never disappeared. In 1899, rumors of a massive strike on the western Alaskan coast near Cape Nome flooded Dawson. Thousands picked up and traveled west. Those who missed their chance in Nome had other opportunities as strikes were made over the next few years across the Alaskan territory.

‹ Getting to the Gold up Mail Service ›
Back to Top