Getting to the Gold 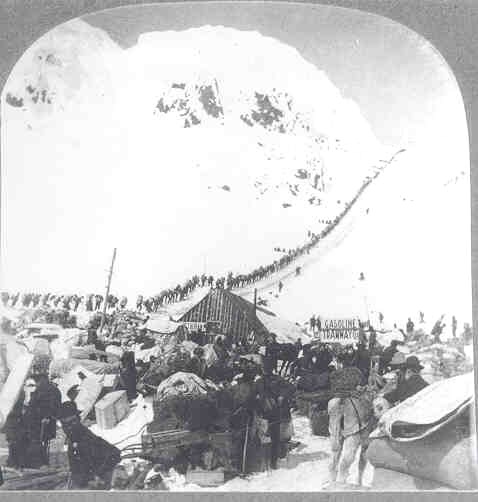 "The Golden Stairs," 1500 steps uphill from the tent city Scales, over the mountain to the Chilkoot Pass summit.
Photo courtesy of David Sundman

"Gold fever" struck people across the United States and around the world. While promoters in both Vancouver, British Columbia and Tacoma, Washington hoped to lure northern-bound stampeders, it was Seattle, Washington which was the most successful at promoting itself as the best departure point for the Klondike. Within days, the city was flooded with stampeders. Ships bound for Alaska were grossly over-booked. Leaky, outdated vessels were pushed into service, taking on as many prospectors as could be crammed aboard.

Of the thousands clamoring to get to the Klondike, few really understood how difficult the journey would be. Most knew better than the man from Chicago who asked a Seattle station attendant for directions to the train to Skagway, which was hundreds of miles away and accessible only by boat.

Skagway, Alaska was one of a number of "jumping off" points for the Klondike. Those who sought advice on the best route to choose were overwhelmed by the dozens of articles, books, guides, maps and pamphlets that flooded the market. Clarity turned to chaos as publishers desperate to cash in on the rush hurried to print using rumors and guesswork instead of reliable information.

Many of the early stampeders were tragically ill prepared for their dangerous odyssey. They carried few supplies and brushed aside warnings of doom. Sadly, some of the poorly outfitted voyagers died of exposure or starvation. The North West Mounted Police responded to that loss of life by insisting that every stampeder who crossed the passes into Canada bring in a ton of supplies--enough to see him or her through a year in the Yukon.

Everyone wanted to make money off of the stampeders. Merchants were quick to exploit the name "Klondike," The word, soon synonymous with unimaginable wealth, was slapped on every product imaginable. Everyday supplies such as blankets or boots, once stamped "Klondike," quickly sold out. The stampeders also took hold of the name, proudly calling themselves "Klondikers."

‹ Discovery up Americans Abroad ›
Back to Top