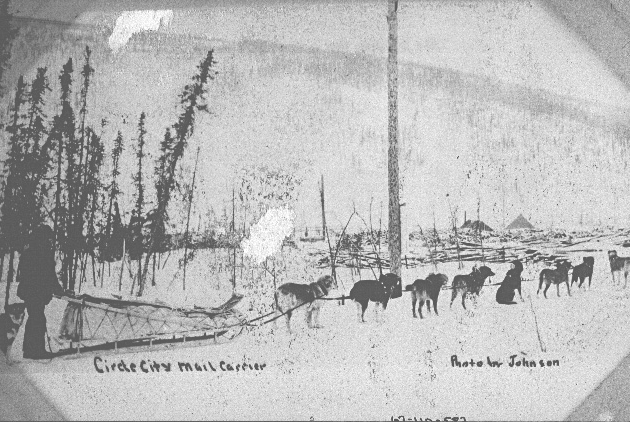 An American mail carrier and his dog team on the trail near Circle City, Alaska.
Photo courtesy of the University of Alaska, Fairbanks

The sudden and dramatic population growth overwhelmed Alaska's postal service. People waited months for their mail, especially during winter. When the steamship or dog sled finally arrived, miners could anticipate standing in line for hours, sometimes even days, before getting their mail. Those who were unable to leave their claims hired others to stand in line for them. Stampeders' devotion to their mail was so strong that when the postmaster of Glenora burned several sacks of mail instead of delivering it, he had to be spirited out of town ahead of a mob.

Only a few mail routes were in place prior to the rush. The postal services were no match for the quickly-growing, highly mobile population. Because of inadequate arrangements between U.S. and Canadian postal officials, bags of mail addressed to Klondikers piled up in Seattle, Juneau, Skagway and Dyea. The worst service was that received by the Americans in Dawson during the first years of the rush. During that winter, letters mailed in the U.S. addressed to Dawson were placed in the Circle City mail sacks. That mail then traveled through Dawson, as the carrier traveled on to Circle City, where the letters were sorted and then finally brought back to Dawson for distribution.

On March 3, 1898, the U.S. Post Office Department appointed John Philip Clum as the Postal Inspector for the Alaskan Territory. Clum arrived in Skagway on March 26th. He immediately set to work improving the area's mail service. During his months in Alaska, Clum traveled over 8,000 miles and established more than a dozen post offices in the territory. He carried everything he needed to create a post office with him--postage stamps, mailbags, postal locks, keys and postmarking devices.

‹ Americans Abroad up Stories from the Gold Rush ›
Back to Top