The stamp and baseball collecting communities overlap. Some postcards sent through the mail are recognized as legitimate baseball cards, while first day covers autographed by players have become collectible to baseball fans. Postal authorities all over the world market baseball stamps and postal items, and baseball souvenirs resembling postage stamps, complete with collecting albums, were commonly published in the twentieth century. Whether they specialize in stamps or baseball memorabilia, all collectors speak the language of rarity, authenticity, history, and condition. A bumped corner, crease, or microscopic tear can dramatically affect collectability and value.

The “White Borders” baseball cards were produced by the American Tobacco Company in sixteen different types, each advertising a tobacco brand such as Piedmont or Sweet Caporal. This is widely regarded as the most famous baseball card set ever issued, for the number of Hall of Fame inductees it depicts and the rarity of cards such as Honus Wagner and Eddie Plank.

This flexible printing plate (above) was used to add a textured, dimensional coating to the Have A Ball! stamp sheet. The baseball stamp in the sheet mimics the feel of raised stitching.

Between 1905 and 1930, several publishers printed baseball cards at regulation postcard size, with spaces for a message and address. These are collected by baseball collectors and philatelists alike—though card collectors prefer mint condition and philatelists generally want cards that have been sent through the mail.

The Helmar brand of Turkish cigarettes included photoengraved vignettes of baseball players, which they described as stamps, in their 1911 packaging. Player busts appear within a frame and their name in a scroll below, very closely resembling postage of their era. Moreover, the Helmar stamps came in little glassine envelopes marked “philately.”

Stamp and baseball card collecting intersected again from the 1960s through the 1980s. Topps, Fleer, and other companies began issuing baseball stamps, first by inserting them into packs of baseball cards and eventually as standalone products. They also offered stamp albums. 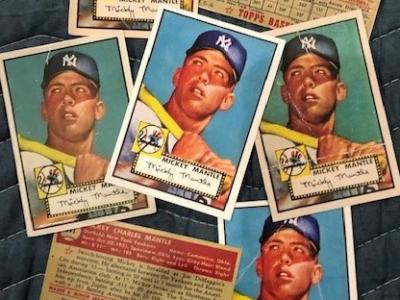 Some baseball fans want to bring home a piece of the game. There is a multi-billion-dollar market for sports memorabilia—and there are plenty of unscrupulous people willing to make a quick buck selling forgeries and counterfeit goods.