Issued by the U.S. Postal Service in 2001, the Legendary Playing Fields stamps speak to the sense of community that fans derive from a favorite baseball park. Eleven ballfields built between 1891 and 1923 are pictured; made of concrete and steel rather than wood, they had seating capacities in the tens of thousands and provided the setting for some of the game’s greatest moments. Press sheets and proof material for this issue are shown alongside signs, seats, architectural elements, and other artifacts from the stadiums pictured to evoke the heyday of these “cathedrals of the game.”

The Legendary Playing Fields stamps were based on vintage postcards, chosen to give a uniform look and color palette. Four of the eleven ballparks pictured were still standing when the sheet was issued; Tiger Stadium was demolished in 2009 and Yankee Stadium in 2010, leaving Fenway Park (opened 1912) and Wrigley Field (opened 1914) as the only survivors.

The stamps were printed in press sheets of 160, then cut into panes of twenty for sale at post office counters.

A four-color printing process was used in which different inks are printed sequentially, one on top of the other, to achieve the full range of final colors. 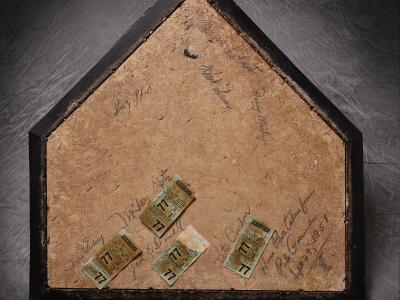 Ballpark artifacts represent multiple facets of the baseball experience, from sights and sounds to excitement and heartbreak.

Take Me Out To The Ball Game
‹ Fan Mail: Babe Ruth up Relics ›
Back to Top