Major League Baseball commemorated two mythical centennials in the twentieth century. The first, in 1939, marked one hundred years since the sport's purported invention at Cooperstown, New York. The second, in 1969, was billed as the "Centennial of Professional Baseball," even though individual players were paid long before baseball's first salaried team took the field in 1869. On both occasions, the Post Office Department issued commemorative postage stamps, lending an air of federal respectability to dubious milestones.

Local boosters parlayed the Abner Doubleday story into a Baseball Hall of Fame and Museum at Cooperstown, New York. The June 12, 1939 opening events and dedication ceremonies, known as the "Cavalcade of Baseball," were the first professionally marketed sporting anniversary in American history. Postmaster General and New York Yankees fan James A. Farley issued a postage stamp for the occasion.

The Cooperstown post office sold more than 630,000 baseball stamps on the first day. Many were affixed to first day covers that were canceled with one of these devices.

To avoid favoring any team or player, the baseball centennial stamp pictured a sandlot game. The Post Office Department also steered clear of picturing Abner Doubleday, although the dates 1839–1939 are an indirect reference. Eighty-one million baseball stamps were issued. 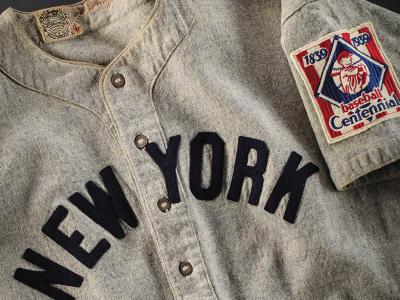 Ty Cobb and Babe Ruth were among the ten "immortals" inducted into the National Baseball Hall of Fame during the 1939 centennial celebrations. Both came from humble backgrounds and transcended troubled, violent upbringings to rise to the pinnacle of the game. In nearly every other way, however, they were a study in contrasts.

James A. Farley
‹ Creating Baseball up 1939 Tripleheader ›
Back to Top