We All Play Ball

As the forty-hour work week became standard, urban laborers joined company baseball teams. By 1927 there were hundreds of these baseball clubs in the United States, making it the most popular form of outdoor industrial recreation. Usually described as a morale-boosting activity, team sports were also intended to blunt labor unrest and head off potential strikes.

America's armed forces were the first workers to embrace baseball as recreation on a large scale. During and after the U.S. Civil War, they redefined the game from a gentleman's club sport to a working-class pastime. Military play during the Spanish–American War (1898) brought baseball to some newly won territories for the first time and cemented its popularity in others. During the two World Wars, hundreds of major league players served in the U.S. armed forces. More recently, baseball has been used by the military to build understanding between U.S. forces and local populations in war zones.

The YMCA shipped nearly 250,000 Napoleon Lajoie professional model bats to France for the recreational use of U.S. soldiers in World War I. Lajoie, a second baseman, had a batting average on par with Honus Wagner and Ty Cobb but is little remembered today.

After delivering food and supplies to Murmansk, Russia in 1943, several American merchant ships were stranded by a German blockade. Their crews turned a bat on the ship's lathe and fashioned a baseball from a Navy boot.

The American Field Service operated ambulances for British forces in the Burma and India theaters during World War II. The volunteer drivers played softball in their spare time.

Military and diplomatic mail services maintain ties between overseas personnel and their home communities. Particularly during the four years of American involvement in World War II, each mail call during baseball season brought longed-for news of how the home team was faring. Servicemen also wrote long letters home describing games played in deserts, on aircraft carriers, and other exotic locales. 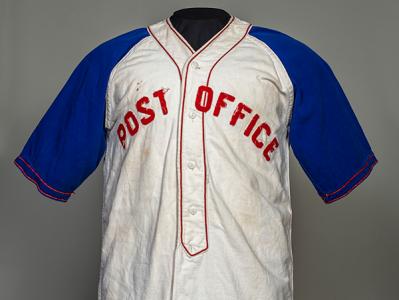 Baseball teams composed of postal clerks and letter carriers first appeared in large cities around the turn of the twentieth century. Teams formed by postal inspectors, attorneys, and other managerial and executive staff developed later. Some teams preferred to play softball because it was friendlier to intergenerational workplaces and less prone to cause injury.

‹ 1939 Tripleheader up Postal Players ›
Back to Top