Maurice Newton was the fourth of the civilian pilots. He was 40 years old at the time he was hired, making him the oldest of the group by many years. He did not fly for very long as he had a serious crash in late September of 1918, a scant month after the civilians first flew the mail. Although Newton did fly the mail the day after the crash, it was generally agreed upon that he was not the same.

He was pulled from flight duty shortly after the crash, and given a desk job. He helped organize the Cleveland-Chicago mail route in early 1919. He asked repeatedly to be reinstated as a pilot, however his wishes were never heeded, and Newton remained grounded, as far as Airmail Service was concerned. 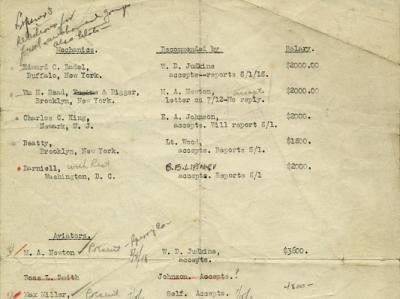 Learn more About Newton: No Compensation

Maurice Newton
‹ Shank: A Long Life up Newton: No Compensation ›
Back to Top