Many collectors find Canal Zone stamps and history of their use fascinating. Although flights by a variety of aircraft had been common in the Canal Zone since 1918 (the year the first transcontinental airmail flight occurred in connection with a World War I Liberty Bond drive), the true era of airmail began in 1929 with introduction of airmail service to the Canal Zone. It was indeed an exciting time.

The first effort to acquire a Canal Zone airmail stamp dates to July 1928. At that time postal authorities sought overprinted U.S. airmail stamps for use in the Canal Zone, but their requests were rebuffed with the response, “It is not believed that a sufficiently large amount of air-mail matter will be dispatched at C.Z. post offices to the U.S. to warrant the preparation of overprinted 5-cent airmail stamps. . . .” Clearly, this proved an inaccurate assessment.

Rapid advances in aeronautical technology soon verified the need for airmail stamps. Charles A. Lindbergh visited the Isthmus of Panama on his Good-Will Tour in 1928, flying his 'Spirit of St. Louis'. He was to deliver the first airmail from the U.S. in early 1929. By then the Canal Zone Postal Service (CZPS) had set the rate for an airmail letter to the U.S. at twenty five cents per half-ounce plus two cents regular postage. Lindbergh reached the Isthmus of Panama in early February, leaving with a large load of airmail matter on February 10. Other inaugural flights to destinations throughout Latin America and the Caribbean followed in short order, prompting the demand for more and better airmail service.

Through the years, the CZPS issued a total of fifty-three airmail-specific stamps in a wide range of denominations to meet rate changes. Interestingly, Canal Zone rates to the U.S. reflected those set in Washington for delivery to the Isthmus, but the CZPS was permitted to set its own rates on mail to foreign destinations since distances and difficulties to those locations varied. For this reason, collectors of U.S. stamps should not be surprised to see such denominations as 22-, 31- and 35-cents on Canal Zone stamps.

In addition to three permanent series airmails, there is a small group of commemoratives on several different themes. In 1941 some airmail stamps were overprinted in limited numbers for official use. There is also an interesting group of airmail postal stationery in the form of envelopes and postal cards. In fact, the initial Canal Zone airmail issue of any kind appeared on a group of 2-cent stamped envelopes with airmail indicia added in mid-1928, many months prior to the first adhesive stamps.

Airmail stamps were still being used when the Canal Zone itself was relegated to history books on September 30, 1979. However, in early 1976 all mail to the U.S was sent by air without the requirement of airmail postage.

Canal Zone airmails provide a fairly easy road to completion, but the use of airmail stamps on first day covers and as postal history artifacts offers a lifetime adventure. 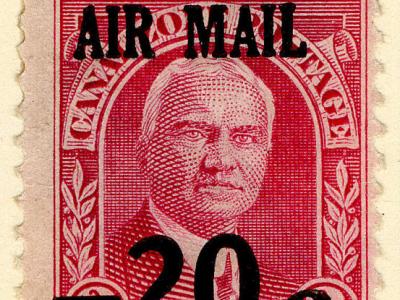 A product of the first flights into and out of the Canal Zone, the first... 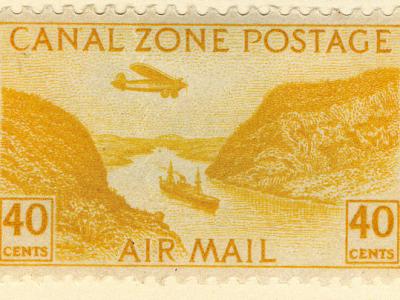 Airmail service from the Canal Zone demonstrated a high level of... 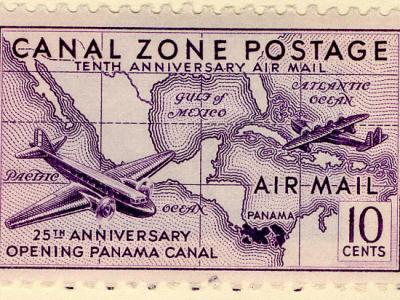 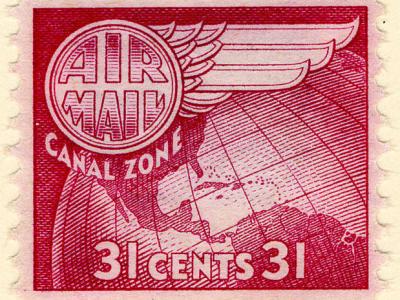 The Globe and Wing airmails comprise two distinct series, the first issued on... 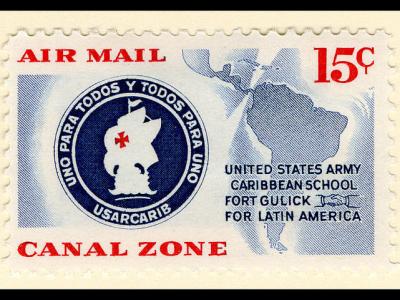 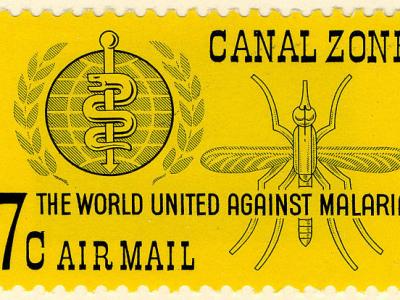 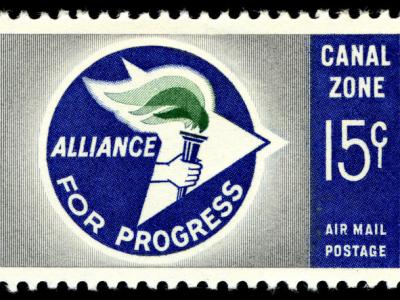 The Alliance For Progress, or "Alianza" as it was commonly called, was one of... 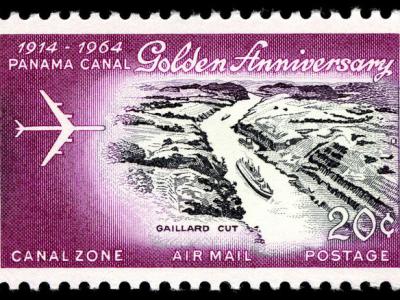 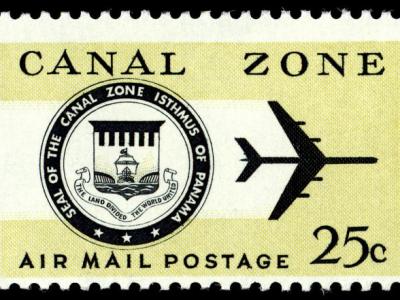 The Canal Zone Seal and Jet airmails (Scott C42-53) were issued at intervals between...