Post offices are the heart of numerous small towns and rural communities. Whether located in tall, distinguished buildings in the middle of town or nestled away in a small, rural country stores, post offices bind citizens to each other and to their government. For many rural Americans, sending a letter or picking up the day's mail remains a cherished opportunity to chat and catch up on local news, take a break, or even play a game of checkers.

This post office was in operation in Dillsburg, Pennsylvania from 1913 to 1971. The town's first post office opened in 1816, seventeen years before the town was incorporated. In 1913, the postmaster moved the operation to a three-story building at the corner of York and Baltimore streets, where the post office occupied half of the ground floor. The lobby was separated from the mail room by these mass-produced oak sections.

The prefabricated panels were purchased and assembled by postmasters to fit the available floor space. These panels were produced by the Federal Equipment Company of New York, New York and Carlisle, Pennsylvania.

Panels chosen for the Dillsburg post office included one with a designated "Money Order" window, another for "Registry" mail and a third for "General Delivery." The post office door was marked "Postmaster" and "private." A separate section offered brass drops for letters, papers and packages.

Although lockbox fees were retained by fourth-class postmasters, they were not a major source of revenue. It is, instead, the presence of the post office in their stores, ensuring a regular customer presence, that encourages a steady source of income for small town postmasters. 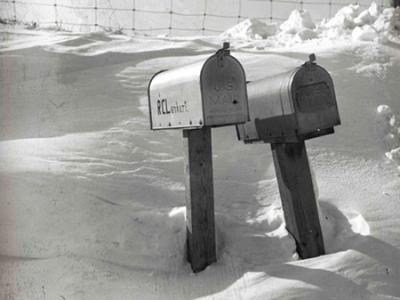 Once part of Reaching Rural America, these exhibits are no longer on display in the museum.

‹ Reaching Rural America up Exhibition Outline ›
Back to Top