The primary purpose of the trips . . . is to establish a daily aerial movement in the face of weather obstacles.
Otto Praeger to Army Capt. A. C. Weidenbach, Fleet's replacement, June 1, 1918

. . . the mail aviators are demonstrating that it is possible to fly in any sort of weather.
Aerial Age Weekly, August 12, 1918

Praeger admonished his pilots and dismissed them for refusing to fly in bad weather. Employees who could not keep to a schedule were of no use to Praeger's service. Pilots, who were willing to fly in wretched conditions, balked at flying in impossible conditions. When pilots refused to fly on July 22, 1919, as ordered, when extremely low visibility would have made the trip almost suicidal, Praeger responded by firing two of the them.

On July 25, Praeger met with some of the pilots to discuss the must fly rules. Both sides claimed victory in the talks, and the pilots went back to flying the mail. Field managers were to have the last say on whether or not pilots would fly. Praeger no doubt believed that his field managers would ask pilots to fly, regardless of weather. The pilots just as firmly believed that as an actual witness to the bad weather, no field manager would insist a pilot fly in impossible conditions. 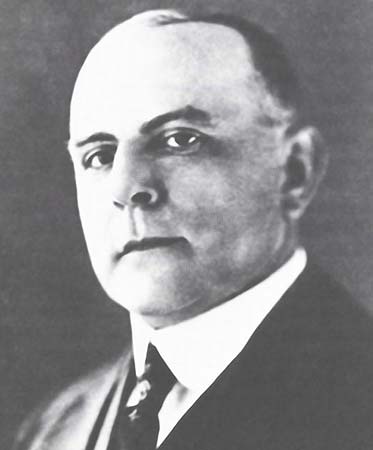 2nd Assistant Postmaster General Otto Praeger, a hunting and fishing buddy of Albert Burleson, was placed at his post after Burleson was named Postmaster General. In spite of a lack of expertise or experience in aviation, Praeger was determined to make the Air Mail Service a success. 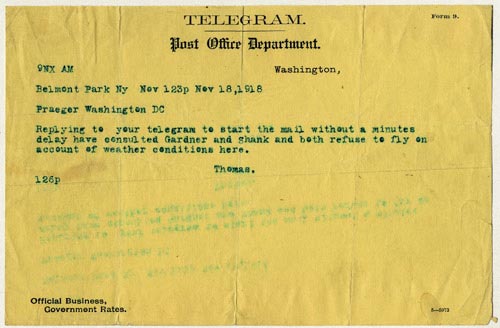 In this telegram to pilots Gardner and Shank, Second Assistant Postmaster General Prager insists that one of them fly the mail that day.
- Courtesy of National Archives and Records Administration

On November 18, 1918, with visibility at the field almost zero, airmail pilot Eddie Gardner told his field manager he would not fly until the weather was better. Robert Shank, ordered to take the mail in his friend's place, also refused to fly. Citing their employment agreements to fly or be fired, Praeger dismissed both pilots. His other pilots got the message. Fly or be fired was the rule. It would not be seriously challenged again until the next summer.

On July 22, 1919, pilot Leon Smith, scheduled to fly that morning on the New York to Washington route, called off his trip. He pointed to visibility limits of 200 feet as impossible for takeoff. When news reached Otto Praeger that a pilot had refused to fly, he responded with a telegram to the airfield's manager that Smith was to "fly by compass, visibility not necessary." Smith refused again to takeoff, as did the three next pilots told to make the trip, Walter Stevens, Clifford Webster and E. Hamilton Lee. Field manager Harry W. Powers asked each pilot to explain his refusal in writing. Smith's written refusal was an attack on his boss. "It is mighty easy, Mr. Praeger for you to sit in your swivel chair in Washington and tell the fliers when they can fly."

Smith and Lee were fired that day. Stevens and Webster were left hanging while an investigation was made regarding their refusals. The firings were the final straw in the animosities brewing between Praeger and his pilots over flying rules. More pilots refused to fly, and Praeger quickly had a full fledged strike on his hands.

The pilots took their tales to the press, and unlike Lipsner before them, were able to get the press on their side. News stories focused on the hazards of flying airmail in the U.S., not on the need for schedules to be kept. One of the fired pilots, E. Hamilton Lee, had agreed to take the mail if he could use a Curtiss Jenny instead of the required Curtiss R-4. The latter airplane had a tendency to over-heat at low altitudes and any pilot hoping to fly that day would have to fly under the fog bank. Praeger had exploded over that request, furious that a pilot would question his orders or selection of aircraft. As Praeger told the press, "the department will not leave to pilots the question of when to fly or type of machine to be used." The autocratic supervisor with no flight experience was at logger-heads with his rebellious pilots.

On July 26, Praeger and James Edgerton, Chief of Flying, met with Charles Anglin who represented the striking pilots. Both sides claimed victory with the final interpretation of the rules. Pilots won a concession that field managers would have final say over flights and bad weather. Undoubtedly, pilots believed that their managers, looking at the same weather conditions they saw, would understand the problem. Praeger kept his "fly or be fired" rule in play. If a field manager deemed that it was safe to fly, any pilot who refused would be dismissed on the spot.

Otto Praeger
‹ NY - Chicago up Lipsner vs. Praeger ›
Back to Top