When Benjamin Lipsner, the first Superintendent of the Air Mail Service, resigned in December 1919, he did so publicly. In letters to Second Assistant Postmaster General Otto Praeger, Postmaster General Albert Burleson and the press, Lipsner called his resignation a protest against unethical and illegal contracting practices by Burleson. His claims were denied by both Praeger and Burleson. Lipsner lost this public opinion battle. And although he left the service, he remained an ardent supporter of aviation and airmail until his death in 1971. 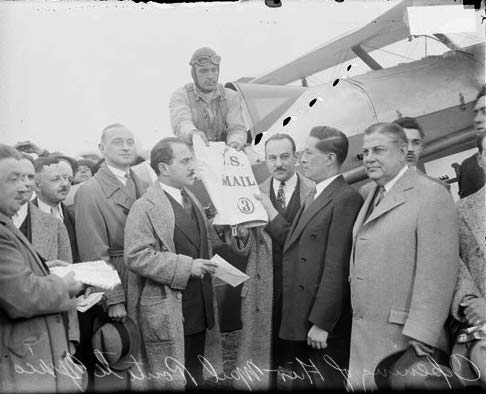 Benjamin Lipsner at an airmail event in Chicago in 1928, almost a decade after leaving airmail service. Lipsner loved aviation and rarely missed any public events. 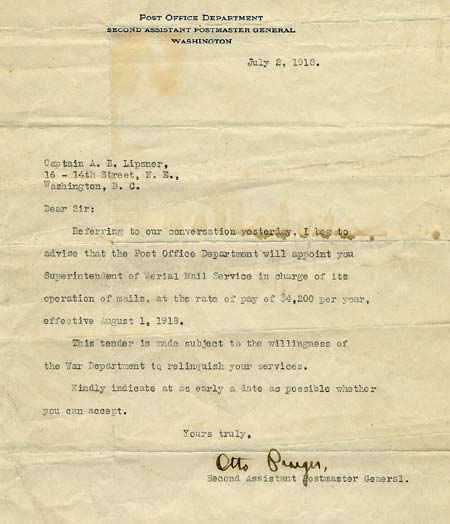 In this letter hiring Lipsner in 1918, Otto Praeger advised him that he would be appointed "Superintendent of the Aerial Mail Service in charge of its operation of mails, at the rate of pay of $4,200 per year, effective August 1, 1918."

Although employed by the Post Office Department for less than four months, Captain Benjamin Lipsner was an integral figure in the development and success of the world's first regular Air Mail Service. Born on September 15, 1887 in Chicago, Illinois, Lipsner was interested in mechanics at a young age. He attended the Armour Institute in Chicago where he received a degree in Mechanical Engineering.

When the army was given the responsibility of providing and maintaining the service, Lipsner was named Captain of the Air Service Production. He was in charge of the maintenance of the airplanes used in the service and was present when the first airplane left from the Polo Grounds in Washington, DC on May 15, 1918. In July, he resigned his commission and signed on with the Post Office Department as the first Superintendent of the Air Mail Service.

One of the highlights of Lipsner's tenure as superintendent was the New York to Chicago path-finding mission in September 1918. The flights were a test of a new extension of the existing service. That test became a cross-country race between the two best pilots, and good friends, Max Miller and Eddie Gardner.

The relationship between Lipsner and his boss began to sour fairly quickly. Praeger had been pushing Lipsner further and further out of the loop for months. Lipsner resigned on December 5, 1918, giving an extraordinarily critical letter of resignation and charges to the press. In his letter, Lipsner made several accusations against Praeger as well as Postmaster General Albert Burleson. Among them was an accusation that the men had admitted they were planning on directing public funds to aviation companies for personal gain. Both Praeger and Burleson pointedly denied all accusations, and when no proof was made the subject died down in the press.

Lipsner went on to a career in the private air industry, serving as an engineer and consultant to a number of oil companies and airlines. He became the head of Chicago's American Legion Aviation Post #651 and appeared on a number of radio and television shows and at numerous commemorative conventions, air shows and testimonials. Benjamin Lipsner died on December 24, 1971, at the age of 84.

Lipsner vs. Praeger
‹ The Strike up Who's in Charge? (Praeger versus the Army) ›
Back to Top