The Postal Service Takes Over

From the beginning, Second Assistant Postmaster General Otto Praeger knew that the success of airmail was not in proving mail could be flown over ever-increasing distances, but that in proving it could be flown on a regular schedule. Without Congressional funding for the service, aided by wide-spread public support and excitement, Praeger's vision was unobtainable.

The army turned operations of the airmail service over to the Post Office Department in August. The department hired army Captain Benjamin Lipsner, Major Fleet's second-in-command, to run the service. Lipsner resigned his commission and became the First Superintendent of the Air Mail Service. The first flight operated by the Post Office Department took off from College Park, Maryland, on August 12, 1918. 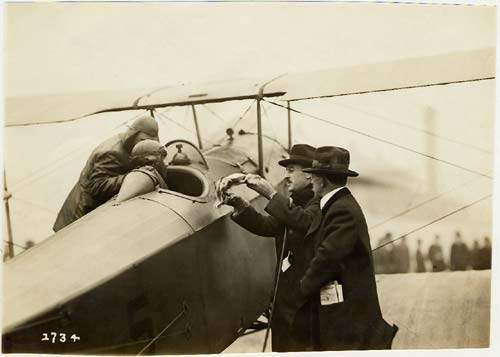 Superintendent of the Air Mail Service Benjamin Lipsner, with American flag in hand, passes it to airmail pilot Max Miller prior to an airmail flight in November 1918. 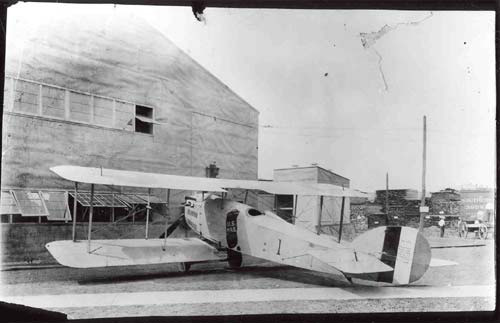 Standard Aircraft Company of Elizabeth, New Jersey, produced six specially ordered aircraft for the U.S. Post Office Department. These special mail airplanes were marked with mailbags on both sides of the fuselage. 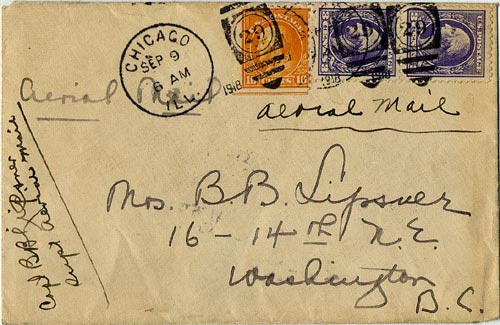 Envelope post marked from one of the early September 1918 pathfinding flights between New York and Chicago.

The postal service still had to prove to Congress that the economic advantages of Air Mail Service made it worth additional funding. A critical segment of the plan was the connection of the two leading U.S. business centers, New York City and Chicago, Illinois. Congress agreed to test flights between New York and Chicago, provided the distance could be covered by airplane in less than ten hours. Anything more than that, and mail could be transported faster by train.

In September 1918, Air Mail Service Superintendent Benjamin Lipsner sent two of his best pilots on a path-finding flight from New York City to Chicago, Illinois. Among the challenges they would face on this route were the Allegheny Mountains, considered by some to be the most dangerous territory on the route.

On September 5, 1918, the pair left New York. Miller flew in a Standard airmail airplane with a 150-horsepower Hispano-Suiza engine. Gardner followed in a Curtiss R-4 with a 400-horsepower Liberty engine and was accompanied by mechanic Eddie Radel.

As each pilot landed to refuel or make repairs, he eagerly contacted Lipsner in Chicago to find out where the other one was. A set of telegrams now in the National Postal Museum tracked the pair's progress. Miller landed in Chicago first, at 6:55 p.m. on September 6. Gardner arrived the next morning, landing at 8:17.