The world's first regularly scheduled Air Mail Service began on May 15, 1918. That morning, pilots readied to fly mail between Washington, D.C., Philadelphia, Pennsylvania, and New York City. The service was organized and manned by the Army's Air Service. Major Reuben Fleet had been tasked with organizing this revolutionary service in less than two months. It was a close call, but Fleet had all his pilots and airplanes ready to go on time. The first flights, with one notable exception, were successful. The army continued to manage the service for the next three months. In early August, the Post Office Department took over, under the direction of Fleet's second in command, Benjamin Lipsner. Colonel Lipsner resigned his commission to run the Air Mail Service under the direction of Second Assistant Postmaster General Otto Praeger. 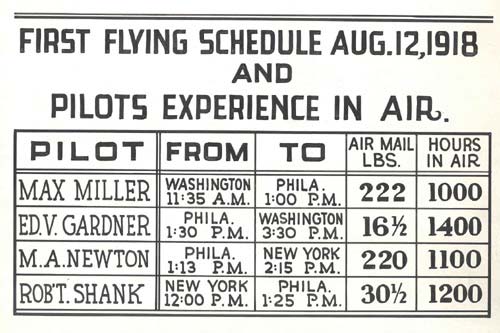 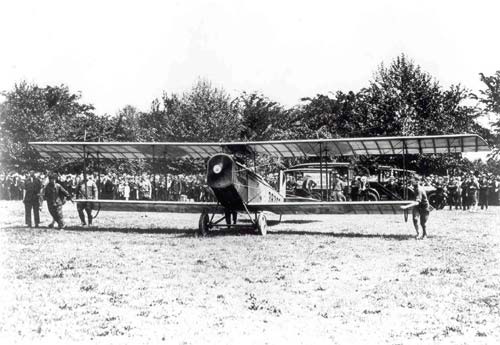 Lieutenant Stephen Boyle in his Curtiss JN-4H "Jenny" airplane on the Washington D.C. polo grounds gets ready for takeoff on May 15, 1918. Boyle was to fly from Washington to Philadelphia, but got lost and crash landed in Maryland that morning.
Learn more about Lieutenant Boyle. 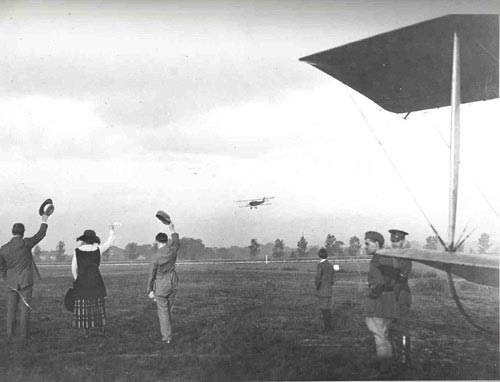 Curtiss JN-4H "Jenny" aircraft after takeoff from the Washington, DC polo grounds on May 15, 1918.

On May 15, 1918, the United States officially established airmail service between New York and Washington, D.C., using army aircraft and pilots. Army Major Reuben H. Fleet was charged with setting up the first U.S. airmail service, scheduled to operate beginning May 15, 1918 between Washington, D.C., Philadelphia, Pennsylvania, and New York City. The army pilots chosen to fly that day were Lieutenants Howard Culver, Torrey Webb, Walter Miller and Stephen Bonsal, all chosen by Major Fleet, and Lieutenants James Edgerton and George Boyle, both chosen by postal officials. Edgerton and Boyle had only recently graduated from the flight school at Ellington Field, Texas and neither had more than 60 hours of piloting time.

Lieutenant Boyle had a powerful ally on his side. He was engaged to the daughter of Interstate Commerce Commissioner Charles McChord. Boyle was selected to pilot the first airplane out of Washington, DC. After all his preparations, Boyle hopped into his airplane and was unable to start it. The airplane had not been fueled. It was an inauspicious start.

Lieutenant Boyle finally got his Curtiss Jenny, loaded with 124 pounds of airmail, in the air. His assignment was to fly to Philadelphia, the mid-way stop between the Washington and New York ends of the service. He did not make it. The novice pilot got lost and low on gas, crash landed in rural Maryland, less than 25 miles away from Washington.

Fortunately for the service, the other flights operated as scheduled that day. Thanks to his political connections, Lieutenant Boyle was given a second chance to fly the airmail out of Washington, D.C. This time, he was given an escort who flew him out of the city, having given him directions to "follow the Chesapeake Bay" towards Philadelphia. Unfortunately, Boyle followed those instructions too literally, following the curve of the bay over to Maryland's eastern shore, where he landed, out of fuel again. Not even Boyle's connections could help him now, and he was removed from the pilot list for the service.

Lieutenant James Edgerton, the other rookie pilot, did much better on his flights and stayed with the service. On another flight, Edgerton managed to keep his airplane aloft during a violent storm, even as the propeller was pelted by hail. He was discharged from the service the next year, and became the Chief of Flying Operations.