In 1921, the army deployed rotating beacons in a line between Columbus and Dayton, Ohio, a distance of about 80 miles. The beacons, visible to pilots at 10-second intervals, made it possible to fly that route at night. The Post Office Department took over the operation of the guidance system in 1922, and by the end of 1923, had constructed similar beacons between Chicago, Illinois and Cheyenne, Wyoming.

Paul Henderson replaced Otto Praeger when a new administration took over in 1921. Henderson recognized the immediate need for beacons, noting that "an airway exists on the ground, not in the air." Congress approved funding for the lighting of the transcontinental route in 1923. Work began first on the Chicago – Cheyenne, Wyoming segment, where mail airplanes would be most likely to be flying during the night. 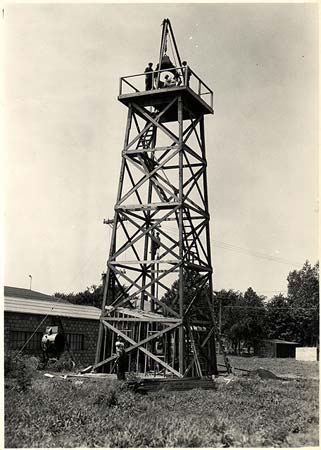 A revolving light beacon tower under construction at the Omaha, Nebraska airmail field. 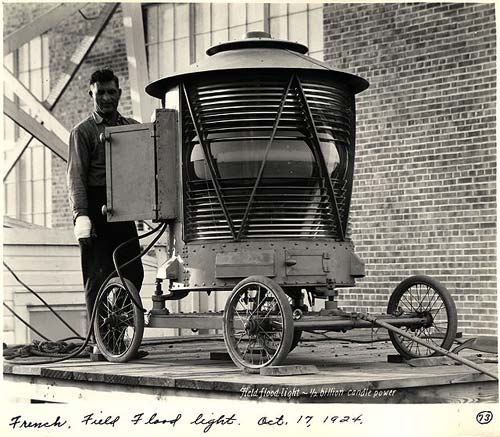 The Air Mail Service beacon system became the world's first ground-based civilian navigation system. Each beacon, erected approximately 10 miles apart, was topped with a 1 million candlepower rotating light which was visible to pilots up to 40 miles away. The system was color coded, with green lights marking nearby airfields, and red lights signifying no airfields at that location. On July 1, 1924, pilots took off on the first regularly scheduled night service. By the end of the year, beacons lit the airmail skies from Rock Springs, Wyoming to Cleveland, Ohio. By the next summer, pilots could fly the entire route aided by these flashy navigators.

Thanks to the postal service beacons, transcontinental airmail was able to be flown all day and through the night. Mail could now reach San Francisco from New York City in 34 hours. Aided by favorable winds, east-bound mail made its way across the country in an astoundingly swift 29 hours!

The system was turned over to the Commerce Department on July 1, 1927, as part of the transformation of airmail from postal service to contract-operated service.

‹ Radio up From Public to Private ›
Back to Top