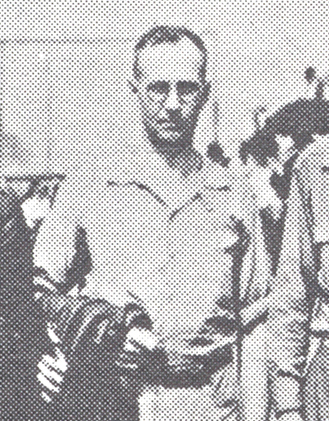 The old man of the group was Maurice Newton, who was 40 when he was hired to fly the mail. Newton gained his aviation experience as a test pilot for Sperry Gyroscope Company, where he had gathered over 1,000 hours of flying time.

On September 25, Newton crashed near Belmont, New York, when his airplane ran into a deep hole hidden by overgrowth. The airplane nosed over, and Newton injured his head. He shook it off, saying that he would fly the very next day. But the injuries lingered, and Newton wasn't the same after the crash. By November 1918, he was assigned to office duty.

In January 1919, he resigned the service. In his resignation letter to Praeger, . Newton noted, "I have endeavored since I have been here in this service to carry out promptly and to the best of my ability any orders I received, and having the welfare of the Air Mail foremost in my mind." In his letter, which took Praeger to task for yet another of his hasty and inappropriate discipline orders (this time for not continuing a flight with a malfunctioning aircraft), Newton said, "When I got to Belmont I received your telegram asking why you should not discipline me. So I telephoned my resignation, I do not care to stay under these circumstances."

Not long after resigning, Newton died suddenly, after complaining of a headache. His wife sought compensation from the postal service, but even though Air Mail officials supported her claim that his last crash had contributed to his continuing head pains and eventual death, the service refused her claim.

Born in Brooklyn, New York, Maurice A. Newton was an experienced experimental flier and instructor who had logged 1100 hours in the air prior to assignment with the Air Mail Service. The first superintendent of the Air Mail Service, Benjamin Lipsner, remembered one of his first hires fondly. "I hired him in spite of his years," Lipsner later recalled. "He was a steady, dependable pilot, and his knowledge of . . . the terrain over which we were flying proved invaluable."

Maurice Newton filed a report to Lipsner on the forced landing he made in a Curtiss R-66 airmail airplane on September 25, 1918. He noted that he took off from Bustleton, Pennsylvania, with the airplane full of "all the mail we could crowd in the compartment, between 400 and 500 lbs." He noted that the airplane carried the weight easily, and when he checked his gas tank, he had 60 gallons in the main tank and was intending to check the tank at Belmont Park field to see how much gas the new airplane's motors were using.

Newton continued his description of the flight. "At one time I was 12,000 feet high, but the average for most of the time was about 6,000. There was a dense layer of clouds 4000 feet over N.Y. and Long Island and as I was above them I held my compass course of 35 to 40° at the end of 45 minutes I throttled motor and volairplaned through, found myself north of Jamaica and within sight of Belmont. I opened by throttle but after a few explosions the engine quit dead. I immediately headed southeast toward some golf links with the field that I landed in second best. I pumped desperately but could not get any air pressure on tank, what made the engine quit was the air pressure went off entirely on my volairplane, although at Bustleton it held up with the motor idling even longer than it did on the dive. I do not understand what made it do that. The hand pump was so ineffective I could not get any pressure whatever. The emergency tank was shut off above so I did not have that to help. As I wanted to use only from the main tank I had read shut off above. That was an error. I fancied that the 3 way valve might leak therefore spoil my test. I found that I could not reach any race tracks nor the golf course so landed in the field, made a good landing and was almost stopped when the machine plunged nose down in a deep hole which was grown up with grass and weeds the color of the field, therefore making it impossible to see until I got into it."

After this spectacular crash, which left Newton more injured than he cared to admit, Second Assistant Postmaster General Otto Praeger assigned him to put his knowledge of the terrain to good use. Praeger asked Newton to assist him in organizing the New York – Chicago airmail flyway.

In a characteristic show of boundless optimism, Praeger bragged that mail would fly between the nation's two largest cities by the end of 1918. Newton and others worked hard to put together the men, airplanes, landing fields and support needed to make Praeger's boast a reality. The result was a miserable failure, with men, airplanes and supplies ending up spread all along the flyway, but no mail in Chicago from New York. Newton who had been given the Chicago-Cleveland section, complained to Praeger that none of the airplanes had been able to reach their destination.

After Newton's death on July 14, 1920, his widow and several airmail pilots lobbied for the postal service to pay compensation to Newton's family. Their requests were denied for years. In yet another attempt to secure that compensation, ex-pilot H. L. Huking, then an Air Mail Service official, wrote a letter of support on Mrs. Newton's behalf. On February 18, 1922, he wrote to the current head of the service, providing a description of Newton's injuries after his September 25, 1918 crash. "Pilot Newton sustained injuries to his forehead when his head hit the windshield, his eyeglasses which he wore under his goggles also broken when his head struck the cowling, the broken lenses cut the corner of his eye and the bridge of his nose. Pilot Newton was taken home by a doctor who happened near the scene of the accident, this doctor gave him first aid and dressed the wounds. I cannot give the name of this doctor as he and Newton had left the scene of the accident before we arrived with the field truck. As I recall there were no compensation papers made in his case at the time of the accident but pilot Newton reported to the field the next day."

Maurice Newton
‹ Eddie Gardner up Robert Shank ›
Back to Top