Hiram H. Rowe joined the Air Mail Service on May 25, 1920, assigned to the College Park, Maryland airmail field. On June 10, 1920, he was transferred to the field at Chicago, where he remained for three months. On September 8, 1920, Rowe signed on at the Omaha, Nebraska field in the Western Division. While he was there, he made a couple of speed records, including one in November 1920 when he broke the record between Omaha and Chicago, making the flight of 440 miles in 3 hours and 12 minutes (a record later broken by pilot William Hopson).

On February 9, 1921, Rowe, fellow pilot William Carroll and mechanic Robert Hill were killed when their JL-6 airplane caught fire in the air and exploded in a nose-dive landing at Lacrosse, Wisconsin. All three men were killed before help could reach them. 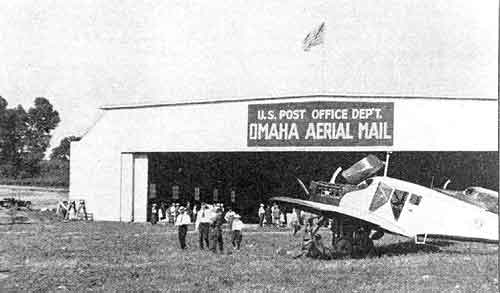 Junkers-Larsen JL-6 airplane at the airmail field in Omaha, Nebraska. 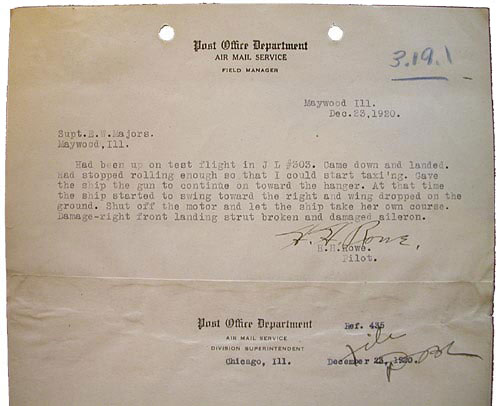 Telegram from Hiram Rowe recounting the circumstances of his December 23, 1920 forced landing.
- Courtesy of the National Archives & Records Administration.

In December 1920, Rowe made a record flight from Iowa City to Chicago in one of the new Junken-Larsen JL-6 aircraft that the postal service was promoting. Airmail officials hoped that the larger metal monoplanes would allow pilots to carry more mail faster than ever before.

The JL-6 aircraft had tested poorly, and as a Chicago paper noted in October 1920, the "pilots refuse to fly Junkers on account of the large number of accidents which are caused by feed pipes breaking or leaking into the cockpits." The airplanes were overhauled with modified fuel systems and placed back into service over the Chicago-Omaha portion of the transcontinental airmail route in late 1920.

Rowe was possibly more familiar with the quirks of the JL-6 aircraft than anyone. In early January 1921, he was flying a JL-6 eastward over Iowa City, Iowa. Although he had been flying through heavy fog, the weather bureau had sent out the report that the fog was rising and it would be safe to continue the trip. However, the countryside within a fifteen mile radius of Iowa City was covered with a dense fog, so heavy that Rowe could not spot the landing field. After circling the area three times, Rowe started to lose altitude and had to make a quick landing. A Chicago newspaper reported that Rowe "took a drop from an altitude of one hundred feet and landed in the rear yard of one of the homes only a short distance from the field. The crowd that congregated around the ship said they could hear the roar of the motor two miles away. Neither the pilot or mechanic was injured. The Junker had its gear and its fuselage damaged. It will be shipped to Maywood for rebuilding."

The JL-6 aircraft were later assigned to the Chicago-Minneapolis route, where Hiram Rowe, accompanied by airmail pilot William M. Carroll and mechanic Robert B. Hill, tried to make a flight out of Chicago to Minneapolis on February 8, 1921. Bad weather forced Rowe down in Wisconsin.

Neither Rowe nor his passengers were injured in that landing. After putting the mail on a train, the group brought the airplane back to Chicago and made another attempt to complete the trip to Minneapolis. The trio were forced down 90 minutes into the trip when the fuel pump failed, causing the engine to backfire. Instead of waiting for a mechanic to arrive with parts to repair the pump, Rowe decided to take off and operate a hand pump to get fuel into the engine if it became necessary. At 5:45 that afternoon they were flying over LaCrosse, Wisconsin. Less than a mile from the field, as the airplane was coming in for a landing, the JL-6 plunged into the ground, bursting into flames. Carroll's body was thrown clear of the wreckage, found with his hand clutching a fire extinguisher. Rowe and Hill were later found trapped in the cockpit, burned beyond recognition.

Rowe's fatal crash in a JL-6 was the fourth fatal crash of that type of airplane, and the latest deaths brought the JL-6 airmail death total to seven. The postal service removed the remaining JL-6 aircraft from service.