One of several airmail pilots who followed their years in the Air Mail Service with careers as pilots for the fledgling aviation companies was Harry W. Huking. Hired to fly airmail on May 3, 1920, he flew over 2,000 hours for the postal service before leaving in 1927. Huking became a pilot for United Air Lines, and in 1952 he was named the nation's ranking commercial pilot.

On May 19, 1922, Huking was flying west form Reno, Nevada in the late afternoon. His de Havilland began having trouble climbing and holding altitude, and its engine was running at 1500 rpm, not 1600, as usual and necessary. Instead of turning back, Huking continued on his route, right over the Sierra Nevada Mountains. His engine held together for about an hour, then dropped below 1400 rpm. As Huking later reported to his boss, "This brought me down into the storm. As I passed 14,000' the engine quit. I cut the switches and glided down through the clouds."

Huking had to clear the mountains and he hoped that the ceiling was high enough that he could squeak through. As he passed over, trees flew by his airplane far too close for comfort, and Huking crash landed at Blue Camp Rock. His de Havilland aircraft was destroyed in the crash, and Huking was knocked unconscious. He was found that way by a farmer, who got him to shelter and assistance. Huking did not regain consciousness for five days.

The week after regaining consciousness, Huking was back in an airmail airplane, flying the mail on his route. 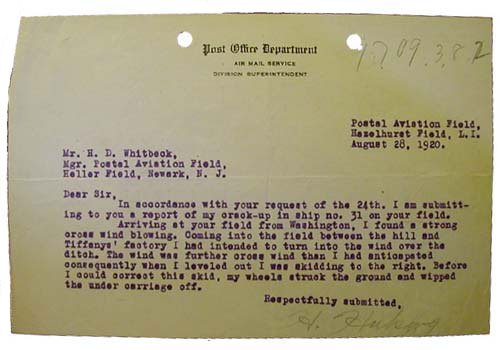 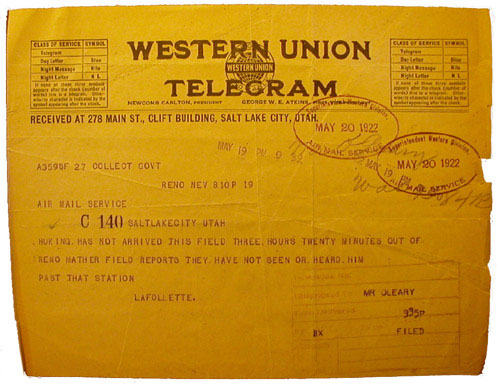 This telegram, dated May 19, 1922, notes that "Huking has not arrived this field [Salt Lake City] three hours twenty minutes out of Reno Mather field reports they have not seen or heard him past that station."
- Courtesy of National Archives and Records Administration