The Atlantic Ocean and lack of gas prevent him going further.
Major Reuben Fleet on Lt. Boyle's flying error, May 15, 1918

The conclusion has been reached that the best interests of the service require that Lt. Boyle be relieved from his duty.
Fleet to Chief of Air Service May 15, 1918

Lieutenant George Boyle was given the opportunity to fly the first airmail out of Washington, D.C. on May 18, 1918. Unfortunately for him, the rookie pilot got lost not just once, but on two separate attempts. After his first two attempts he was removed from the airmail service. 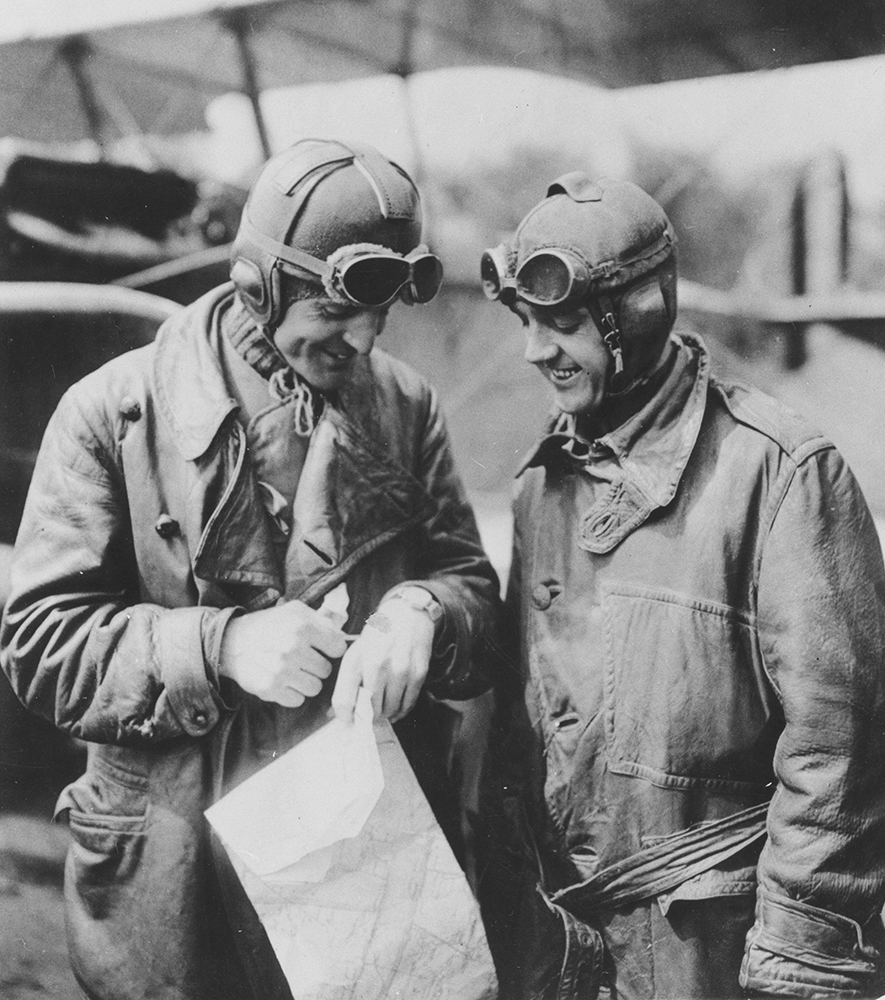 Major Fleet (left) and Lieutenant Boyle admire Fleet's new watch. The Hamilton Watch company presented each of the Army fliers with a new wristwatch in honor of their historic flights. 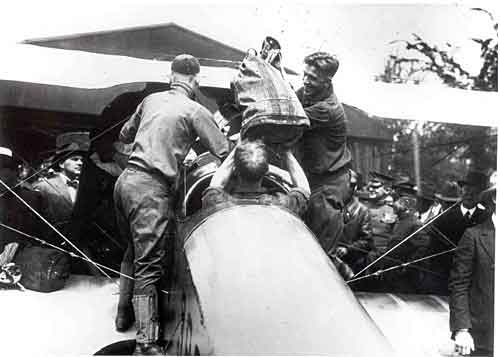 The airmail bags being loaded into Boyle's Curtiss Jenny the morning of May 15, 1918.

James Edgerton was the only other airmail pilot with little experience. Unlike Edgerton, Boyle did not rise to the challenges of the occasion. Thanks to his engagement to the daughter of an Interstate Commerce commissioner, Boyle was given the plum assignment of flying the mail out of Washington, D.C. on the first day of service.

On hand for this historic event were President Woodrow Wilson, Postmaster General Albert Burleson and a host of federal officials and reporters. Boyle climbed into his airplane and called for the propeller to be spun. Nothing. A second, then third try yielded no sound other than a slight engine cough before it died. As the President and other onlookers waited, the mechanics and pilots tried to figure out what was wrong. Finally someone checked the gas tank, which was empty. Gas was added, the engine started and Boyle took off on his glorious adventure.

Lieutenant Boyle finally got his Jenny, loaded with 124 pounds of airmail, in the air. His assignment was to fly to Philadelphia, the mid-way stop between the Washington and New York ends of the service. Unfortunately, he did not make it. The novice pilot got lost and low on gas, crash landed in rural Maryland, less than 25 miles away from Washington.

Thanks to his political connections, Lieutenant Boyle was given a second chance to fly the airmail out of Washington, D.C. This time, he was given an escort who flew him out of the city, having given him directions to "follow the Chesapeake Bay" towards Philadelphia. Unfortunately, Boyle followed those instructions too literally, following the curve of the bay over to Maryland's eastern shore, where he landed, out of fuel again. Not even Boyle's connections could help him now, and he was removed from the service's active list of pilots.

‹ James C. Edgerton up Culver and Webb ›
Back to Top