In the 1930s, mail contractors decided to test the feasibility of inaugurating Air Mail Service in areas without adequate railway or highway mail links. Unfortunately, the towns which needed this type of service usually did not have adequate landing fields for airplanes.

The plane that was initially used was a single engine Stinson aircraft, capable of operating at speeds of approximately 150 miles an hour. On the ground, the postmaster loaded the town's mail into a container which was then placed on top of a contraption resembling a goal post.

The airplane's crew consisted of the pilot and a flight officer who worked the pick-up mechanism, making the mail exchange. As the pilot guided the airplane down, the flight officer lowered a grappling hook to snag the container while mail destined for the community was then dropped from the plane onto the airfield. The technique was modeled on the Railway Mail Service's "mail-on-the-fly" pickups. 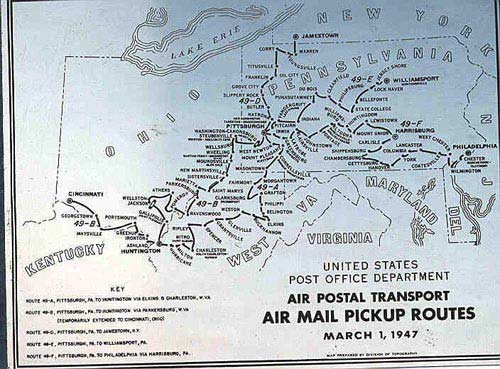 Map showing the extent of the experimental airmail pickup service. 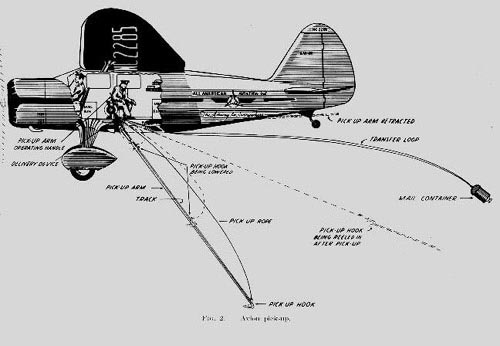 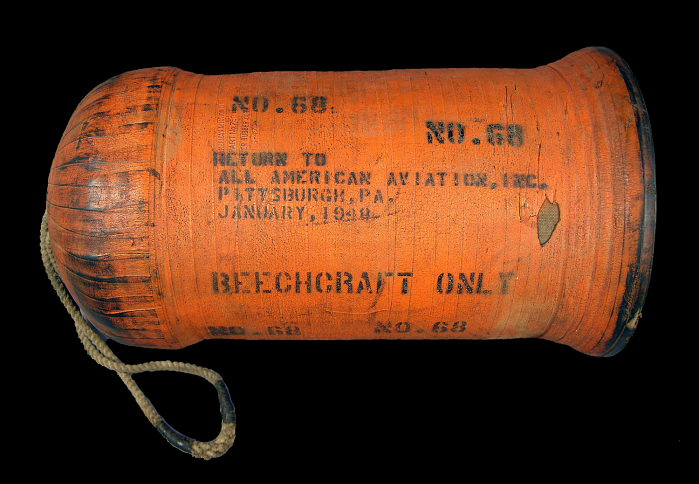 Rubber container used by All American Aviation to hold the mail for pick-up airmail service.

In the 1930s, mail contractors decided to test the feasibility of inaugurating airmail service in areas without adequate railway or highway mail links. Unfortunately, the towns which needed this type of service usually did not have adequate landing fields for airplanes.

Although a low-flying airplane could easily dump a sack of mail onto the ground, the difficult part would be getting ground mail into the moving airplane. The Railway Mail Service's successful on-the-fly mail exchange system provided the inspiration for an aviation experiment. Mail would be "caught" by a airplane flying overhead and reeled up into the airplane. Of course, catching the mail was not going to be easy.

An airplane outfitted with a hook flew over the posts, and successfully hooked the mail and reeled it in. At the top of each pole was a small direction flag, which showed the pilot the prevailing wind direction; and a pincer, which was used to keep the 60 foot long noose attached to the mail canister in place.

Mail contractors realized that throwing the mail out of a passing airplane wasn't going to be easy either. A simple mail sack wasn't going to be sufficient because it would be prone to fall in a random direction depending on the wind. A weighted holder was needed. But, if the canister was too heavy it might cause significant damage if it hit something when it fell. Then too, the canister holding the mail had to be able to survive repeated drops. Various different styles of receptacles were tested. Ultimately a hollow rubber design, resembling the nose cone of a rocket, was chosen.

The airplane that was initially used was a single engine Stinson aircraft, capable of operating at speeds of approximately 150 miles an hour. The crew consisted of the pilot and a flight officer who worked the pick-up mechanism, making the mail exchange. To deliver the mail, the flight officer lowered the mail container out of the bottom of the aircraft through a special opening. Just before reaching the poles he released the canister. Almost at the same instant an arm was lowered. The grappling hook snagged the hanging mail pouch then slid down the arm and caught the noose. Once the catch was made the flight officer activated the winding mechanism to reel the mail canister into the airplane.

The method of exchanging mail in transit was adopted for experimental airmail routes in Ohio, New York, Pennsylvania, Kentucky, and West Virginia. In all, more than 150 post offices were served. This style of pick up and delivery service began on May 12, 1939. The mail contractor that used the service was All American Airways Company. (Which later became known as Allegheny Airlines, and is now USAir. )The experimental routes covered 1,040 miles. During the first year of operation, more than 23,000 pick ups were made, amounting to 75,000 pounds of mail. The service was used in those areas for about ten years.