The Douglas M2 aircraft was the first significant improvement of an airmail airplane. After years of relying on the sturdy but aged de Havilland to carry the bulk of the mail, airmail pilots eagerly welcomed new craft such as the M2. 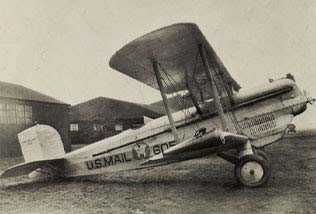 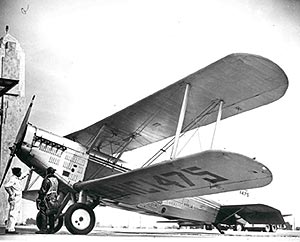 Unidentified pilot and mechanic checking over a Douglas M2 before takeoff. 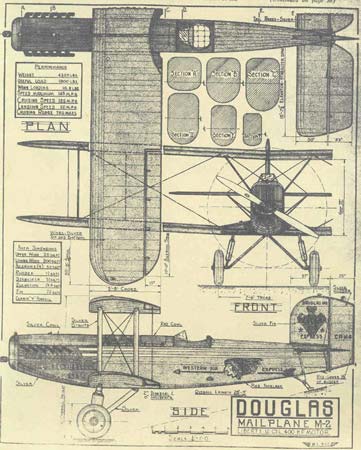 Diagram of a Douglas M2 airplane.

Produced by the Douglas Company, the M2 airmail biplane was a single-bay biplane with the conventional form of axleless undercarriage. The fuselage, a truss of steel tubes and tie rods, was made in two detachable sections. The engine section was detachable at the station at the front wingbeam and the engine cowling was hinged to facilitate inspection. The fuselage aft of the firewall was covered with fabric. The wings, vertical fin, and horizontal stabilizer were of standard wood beam and built-up rib construction, with the elevators and rudder made of Duralumin tubing. The power plant was a 400-hp, Liberty water-cooled engine, with nose radiator. Two main fuel tanks, each of sixty gallons capacity and made of sheet aluminum, were so mounted in the lower wing that they could be jettisoned by the pilot. A small 10-gallon gravity tank was located in the upper wing.

The mail compartment was situated in front of the pilots cockpit, sealed from the engine by a fireproof bulkhead, and lined with reinforced Duralumin. It was six feet long, had a capacity of 58 cubic feet, and could carry up to 1,000 pounds of mail. A unique feature was the provision of two removable seats that permitted carrying passengers or reserve pilots from one field to another. The passengers were seated well down in the compartment and protected by suitable windshields. Access was provided by the use of aluminum covers over the top, arranged and constructed so that, with passengers aboard, the roof door could be folded down. providing a cockpit opening.

- Text courtesy of the Smithsonian Institution's Air and Space Museum