Romance of the Clippers

When Pan American Airways decided to introduce transpacific airline service, it needed an airplane with a high cruising speed and long-range capability. The Sikorsky S-42 and Glenn L. Martin 130 were tested for this service. With its 3,800-mile range, the Martin 130 was poised to fulfill all of Pan American's expectations.

Boeing's S-307, Stratoliner, nicknamed the "Clipper Flying Cloud," by Pan American Airways, was the first world's first pressurized commercial aircraft designed to fly at altitudes of up to 20,000 feet. The airplanes could carry 45 passengers and flew successfully through the 1940s. In 1948, Pan Am retired the Stratoliner fleet.

These flying boats were a big hit with the American public. One was nicknamed the China Clipper after the 19th-century sailing ships that traded between New England and China.

It was Pan American's China Clipper that made the first transpacific airmail flight on November 11, 1935, traveling from San Francisco to Honolulu, Midway Island, Wake Island, Guam, and finally Manila, The Philippines. 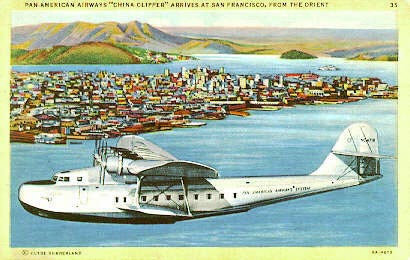 A clipper used on a postcard to advertise romantic and adventurous travel. 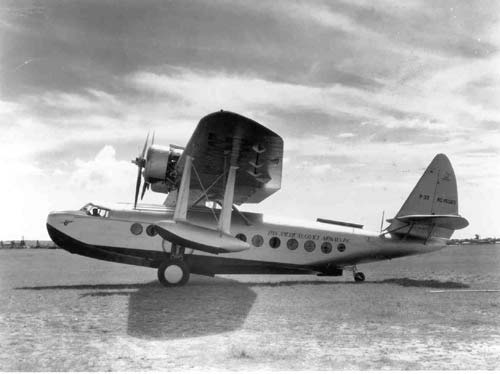 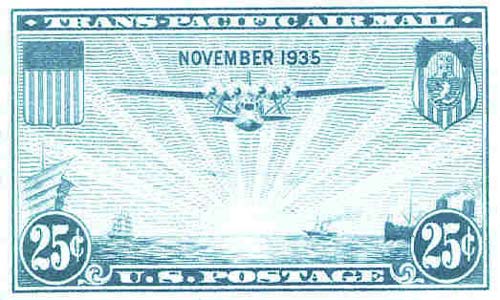 Clipper was an easily recognizable icon of transpacific and Caribbean passage and airmail service. This one adorns a U.S. airmail stamp.

The Martin M-130 "China Clipper" first carried passengers, along with mail, on October 21, 1936. The airplane's central lounge had comfortable armchairs, and passengers dined on food served on fine china and silverware.