It could fight winds and weather and carry heavier loads.
"Ham Lee" on the de Havilland mail airplane

We had quite a system worked out to make sure we got away on schedule. We had a dozen DHs lined up and we went down the line trying each ship. When we found one that would start we threw our mail in the cockpit and were off.
Harold "Slim" Lewis', lighthearted view of the pilots' flight assignments

In 1918 the Post Office Department requested 100 de Havilland airplanes, model DH-4, from the army. Created by Geoffrey de Havilland, these airplanes had been built both in England and the United States during the last years of the war. Like most of the 2,500 fighter airplanes built in the United States by 1918, few DH-4 aircraft even saw battle.

The de Havilland began to retire from Air Mail Service in 1926 when the Post Office Department began to contract the service from private carriers.

In 1918 the Post Office Department requested 100 de Havilland airplanes, model DH-4, from the army. Designed by British engineer Geoffrey de Havilland, these airplanes had been built both in England and the United States during the last years of the war. Like most of the 2,500 fighter airplanes built in the United States by 1918, few DH-4 aircraft even saw battle.

Although the airplanes' range (350 miles) and load capacity (500 pounds) were good, de Havillands were not suited for the rigors and demands of airmail service, having been built for high-altitude military observation use. The most precarious design flaw was the placement of the cockpit. Pilots were too easily trapped between the engine and the mail compartment in accidents where minor crashes turned deadly, burning entangled pilots alive. The airplanes quickly gained a macabre nickname—flaming coffins. Among those killed in the early de Havilland airmail flights was Carl Smith, who stalled out over Elizabeth, New Jersey, while testing a DH-4 on December 16, 1918.

In January 1919, the de Havillands were removed from service for extensive renovation work. The cockpit was moved to the rear and rimmed with padded leather for cushion in rough landings. The exhaust stacks were extended beyond the cockpit, so pilots would no longer be blinded by exhaust fumes. To make the airplanes more durable, the linen fabric fuselage was replaced with plywood sheets over wood struts. The landing gear was repositioned and larger wheels were installed. The DH-4 instrument panel also had problems. The airplane's compass was notoriously unreliable. When flying east, it could oscillate from east to 90-degrees north. Air pressure through a metal pipe activated the airplane's air speed indicators. Unfortunately, the pipes, placed on the bottom wing's leading edge, were regularly filled with mud. More seriously, the altimeter registered 1,000 feet for each 1" around the scale, making it useless below 1,000 feet.

When the retrofitted de Havillands (now known as DH-4B) were returned to service, the improvements proved enormously successful. In their first year of service, de Havilland airmail airplanes carried more than 775 million letters. The airplane quickly became the workhorse of the airmail service. In 1921, as an additional safety measure, pilots were assigned individual airplanes and allowed to modify them to meet their individual demands. The DH-4Bs began to retire from airmail service in 1926 when the Post Office Department began to contract with private carriers. When the Post Office Department relinquished control of the airmail service to private industry, entrepreneurs used the money they made from carrying the mail to maintain and expand their routes and upgrade their services. 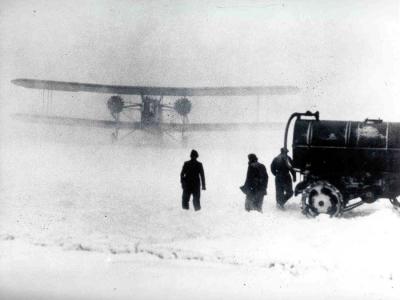 Learn more About A Fatal Error - the de Havilland Twin 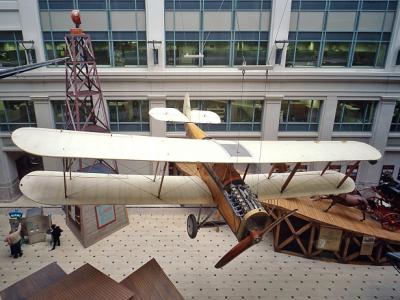