I always considered it a very safe airplane because the carburetor would vibrate the airplane so badly that it would shake the ice off the wings.
Airmail pilot Ernest M. Allison on the Jenny

Arguably the most flown airplane of the 1920s was the Curtiss-Jenny JN-4, nicknamed the Jenny. Originally manufactured for army training use, hundreds of surplus Jenny airplanes became available for public use at the end of the first World War, and were snatched up by men and women all across the country who flocked to the skies. Just prior to the end of the war, six of these airplanes, designated JN-4H for their 150 horse power Hispano-Suizo engines, were used for the first regularly scheduled Air Mail Service. 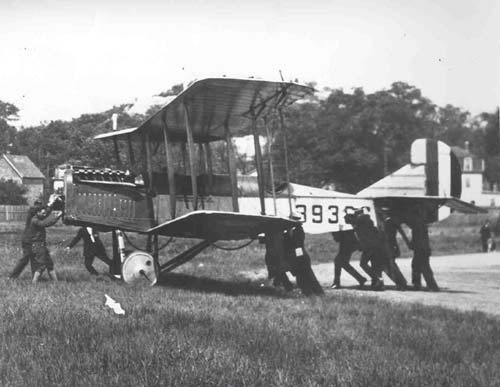 Helping a Jenny off of the runway. 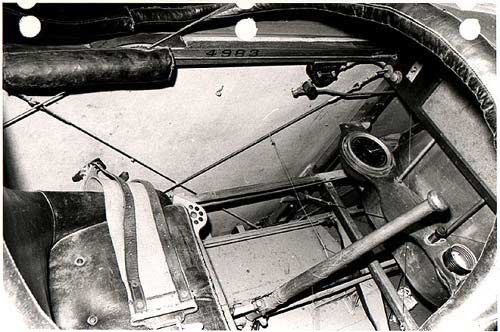 The Curtiss manufactured JN-4H aircraft was nicknamed the "Jenny." This single engine biplane was used during World War I by the U.S. Army Air Service. Army pilots easily joked that the airplane was "a bunch of parts flying in formation," and that "if you can fly a Jenny, you can fly anything!"

These airplanes were designed by B. Douglas Thomas. The Post Office Department began using them on May 15, 1918, when the first scheduled airmail service was instituted. Jennies were flown between Washington, D.C., Philadelphia, Pennsylvania, and New York, New York. Army pilots flew the airplanes for the first two months of the service, until the postal service was able to hire its own pilots.

The Jenny's top speed was about 80 mph, with a range of about 175 miles and a ceiling of about 11,000 feet. The airplane's wingspan was 43 ft., 7 inches, and the airplane weighed just over a ton. Before the airplanes were taken by the postal service, their 90-horsepower engines were replaced with 150 horsepower Hispano-Suiza engines. The Jenny could carry a little less than 300 pounds of mail per trip. The front seat was left out of the redesigned airplanes, in order to carry mail bags. The airplanes' gas capacity was doubled when a set of gas tanks were hooked together so the airplane could fly farther.

Sometimes a liability can also be an asset. When airmail pilot Ernest Allison was asked his opinion of the airplane, he said that he considered it safe because the airplane's "carburetor would vibrate the airplane so badly that it would shake the ice off the wings."