The German Zeppelins criss-crossed the Atlantic from the late 1920s into the 1930s. On May 6, 1937, the Zeppelin Hindenburg burst into flames while attempting to land at Lakehurst, New Jersey. The airship crumpled to the ground, killing thirteen passengers, twenty-two crew members and a member of the U.S. ground crew. Although the Zeppelins had a perfect safety record to this point, the publicity of this horrifying crash struck a blow from which the commercial airship industry would not recover.

The Hindenburg carried 2,255 pounds of mail on this trip. A postcard salvaged from the wreckage made its way to the National Postal Museum, along with a surviving piece of the airship's fabric skin. Charred and fragile, the card was enclosed in a glassine envelope by the U. S. Post Office Department and officially sealed before delivery to the addressee. 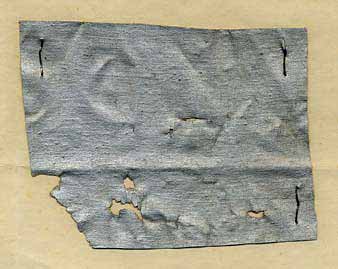 A section of fabric salvaged from the Hindenburg airship. It was donated to the National Postal Museum along with the recovered postcard. 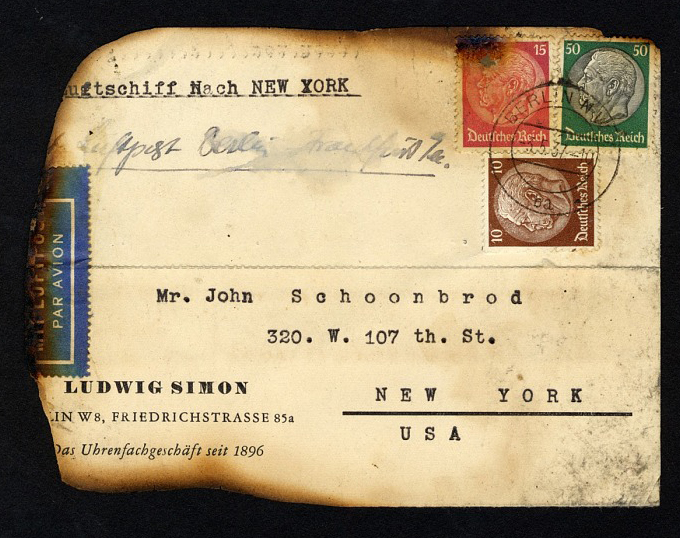 This postcard, addressed to John Schoonbrod of New York City, was among the pieces of mail recovered from the Hindenburg after it crashed at Lakehurst, New Jersey.

‹ Zeppelins up Balloons ›
Back to Top