These rigid airships were named for Ferdinand Graf von Zeppelin, a German officer who perfected the creation of these lighter than air craft. Technically, only craft built by the Zeppelin company are Zeppelins, but the name became synonymous with other rigid airships. The Zeppelin first took to the air on July 3, 1900. After the war, Zeppelins criss-crossed the Atlantic, carrying passengers and mail. The Graf Zeppelin was the most famous of these airships. It was so popular that the U.S. issued airmail stamps depicting it in 1930. These stamps included the 65 cent green "Zeppelin over the Atlantic Ocean," $1.30 brown "Zeppelin between continents," and $2.60 blue "Zeppelin passing globe" issues. A 1933 U.S. airmail stamp was issued featuring the "Graf Zeppelin" flying between the federal building at the Chicago Century of Progress International Exhibition and the Friedrichshafen, Germany hangar. This stamp was issued in conjunction with the airship's flight to Chicago and other U.S. cities.

In contrast to the rigid airships were blimps. When Zeppelins and other rigid aircraft fell out of demand in the 1930s (in part due to the 1937 Hindenburg disaster), blimps continue in use today. However, instead of carrying mail, blimps are now more commonly known for carrying television equipment over sporting and entertainment events. 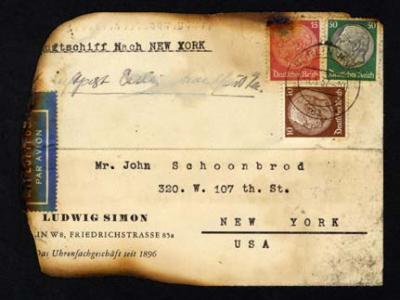