For some, a voyage on Titanic offered opulence comparable to that of the finest hotels. Upper class passengers enjoyed gourmet meals and aged liquors, a swimming pool and gym, and many other comforts. Those traveling in steerage, however—primarily immigrants hoping for better lives in America—enjoyed no such luxuries. Nonetheless, passage included food, mattresses made sleeping more comfortable, and the tiny cabins boasted electric lights and running water. 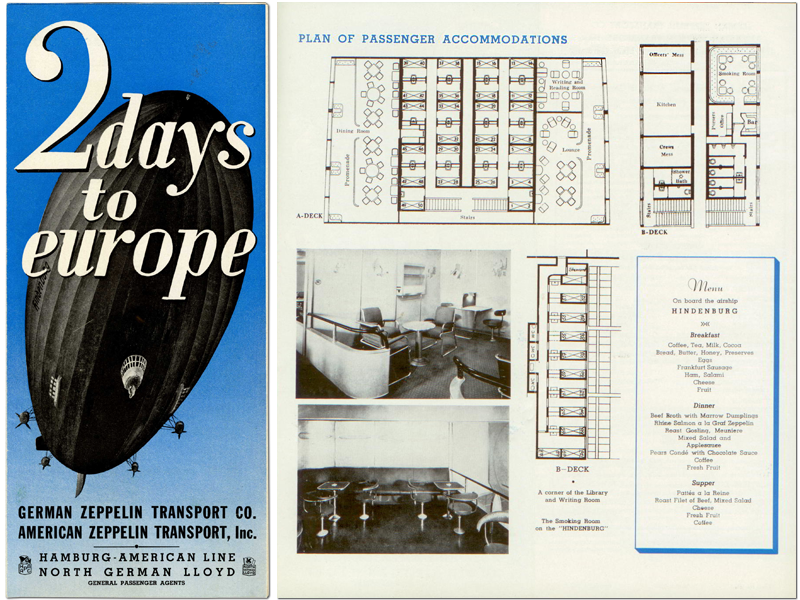 Promotional brochures extolled the luxurious life onboard. The romance of flight plus travel in half the time of an ocean voyage by ship appealed to adventurous travelers, business professionals, and famous personalities. 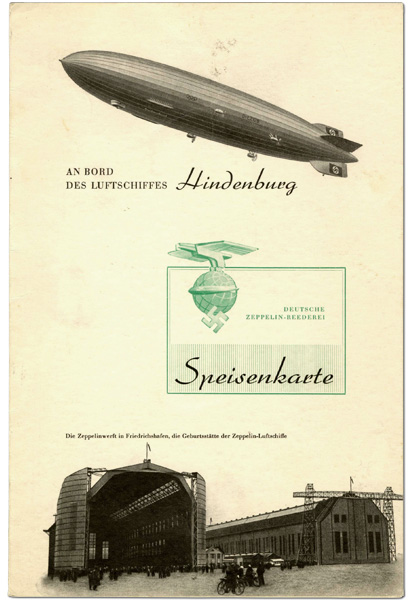 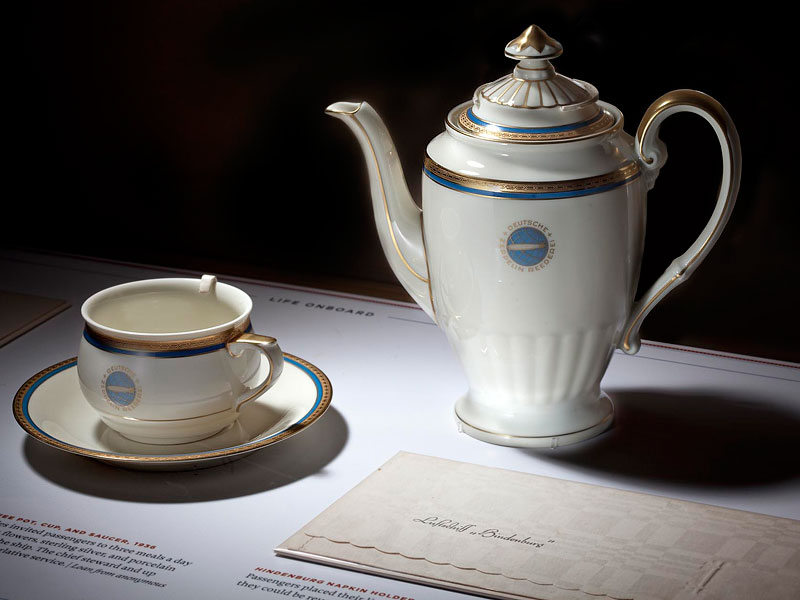 The dining room tables invited passengers to three meals a day with white linens, fresh flowers, sterling silver, and porcelain china service created for the ship. The chief steward and up to six waiters provided superlative service. Passengers placed their linen napkins in holders after the meal so that they could be reused and save precious weight. 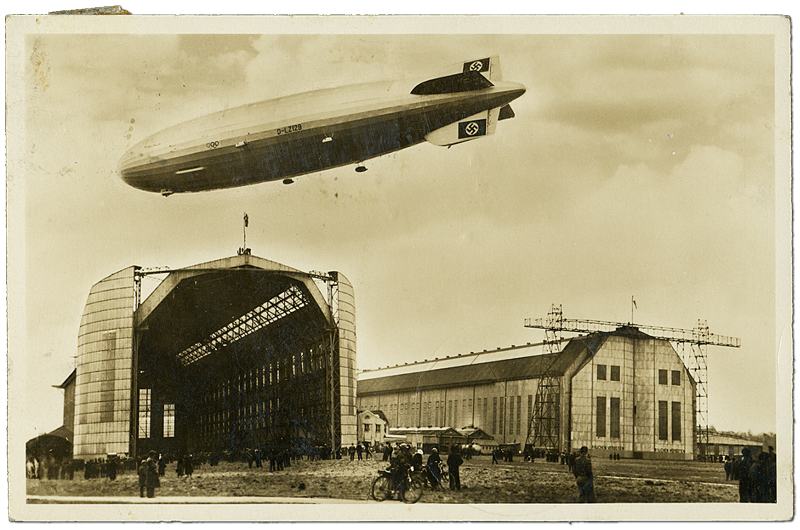 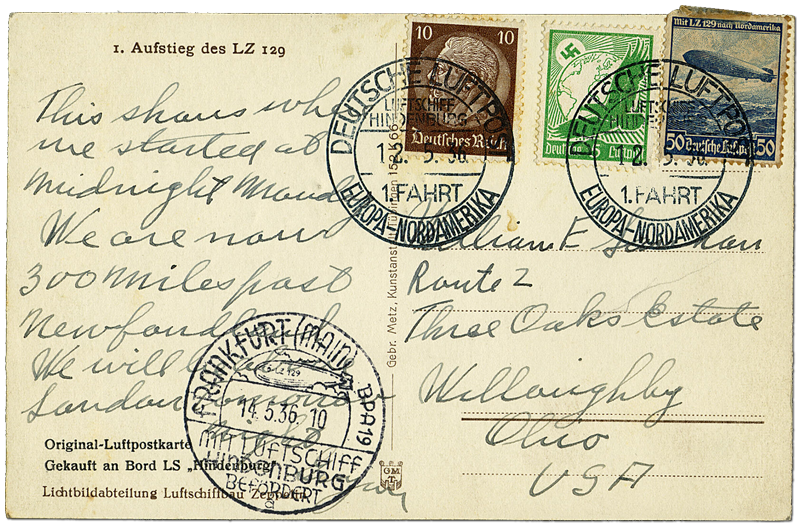 Businessman Joseph Gogan traveled with his 14-year-old nephew William, the youngest transatlantic Hindenburg passenger to that date. The postcard, purchased onboard, received the special on board postmark and a Frankfurt, Germany, receiving cancel after arrival. 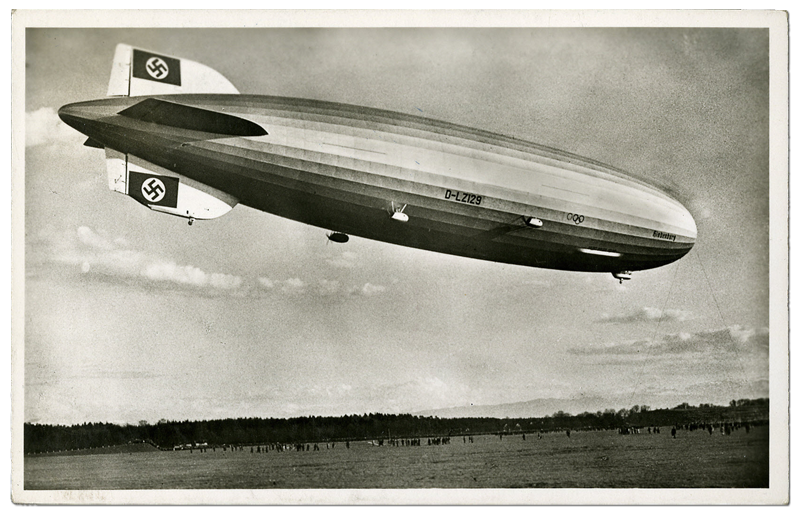 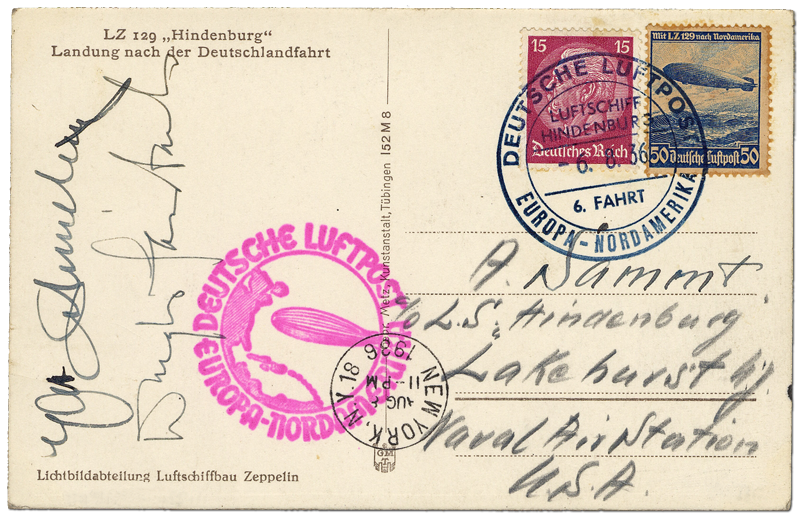 German boxer Max Schmeling and movie actor Douglas Fairbanks, both passengers, signed this card for Captain Albert Sammt. In 1937, Sammt survived the Hindenburg disaster by jumping from the gondola and climbing through the burning wreckage crashing down around him. 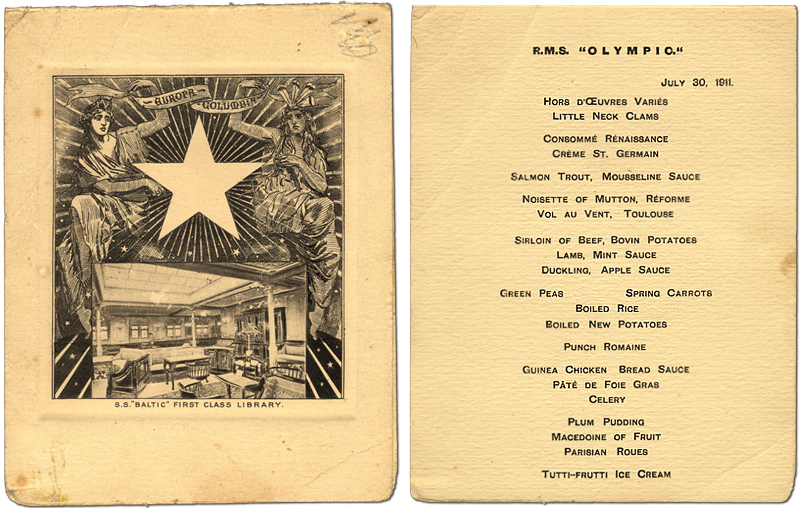 Dinners in the first class dining saloon of a White Star liner usually consisted of eleven courses. One first class menu survives from Titanic’s last night, and about half of the dishes were the same as shown here. 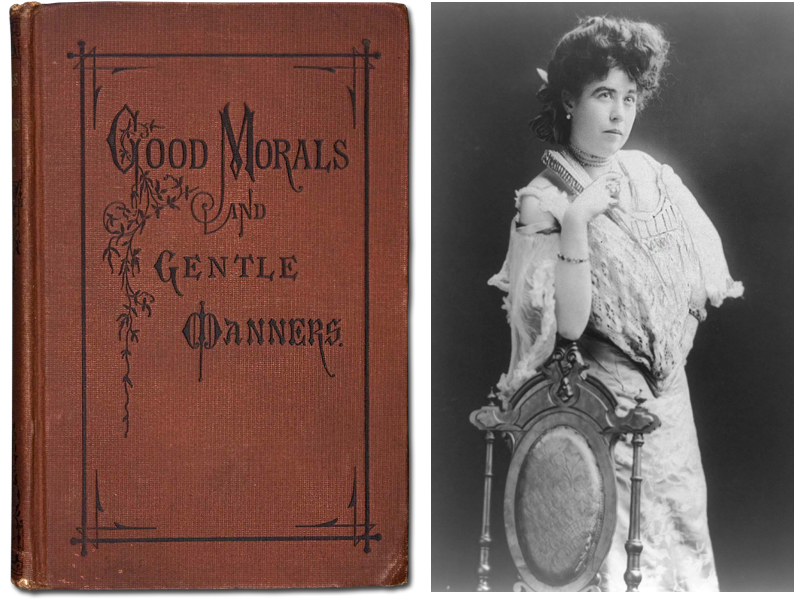 Elaborate rules and manners governed the upper-class Edwardian table, and violating them was an embarrassment. Etiquette books guided those who, like Titanic survivor Margaret Brown, were not “to the manner born.” 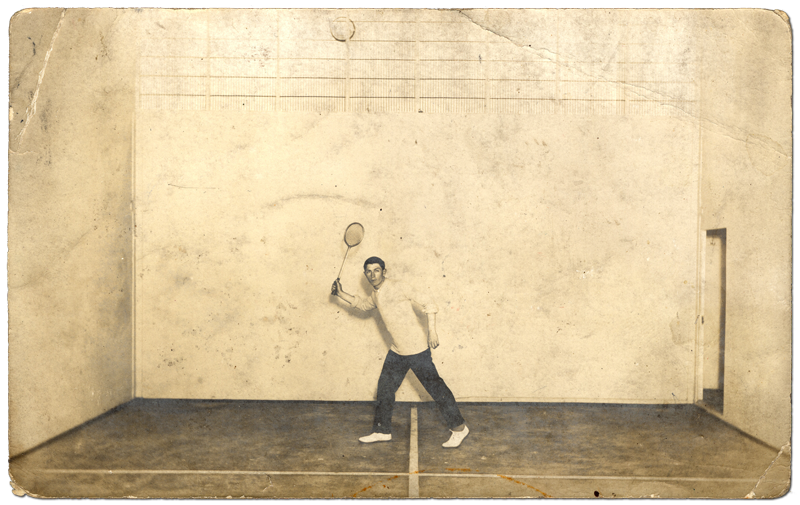 Fred Wright poses in Olympic’s squash court in this real photo postcard from 1911. On both Olympic and Titanic, the squash court was adjacent to the post office on G Deck. 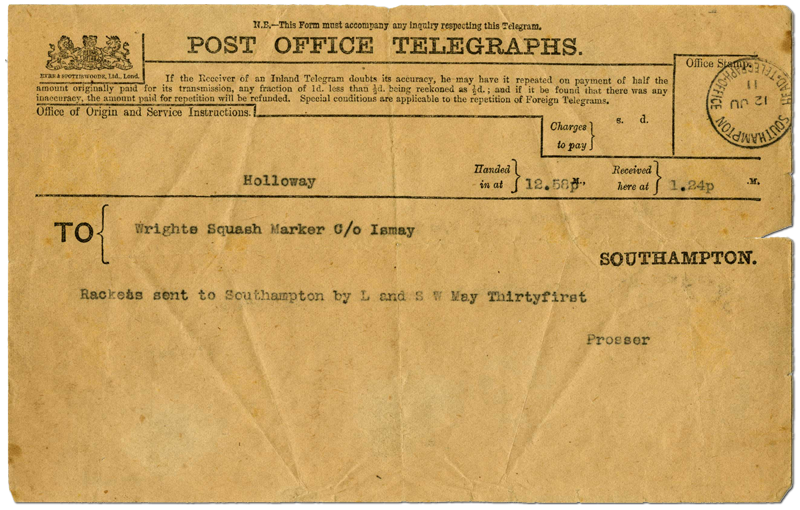 This telegram from J.H. Prosser & Sons of London advises Fred Wright, squash instructor aboard Olympic (and later Titanic), that his shipment of rackets is on its way. First class passengers paid two shillings and two pence for an hour-long squash game against Wright, who did not survive the sinking. 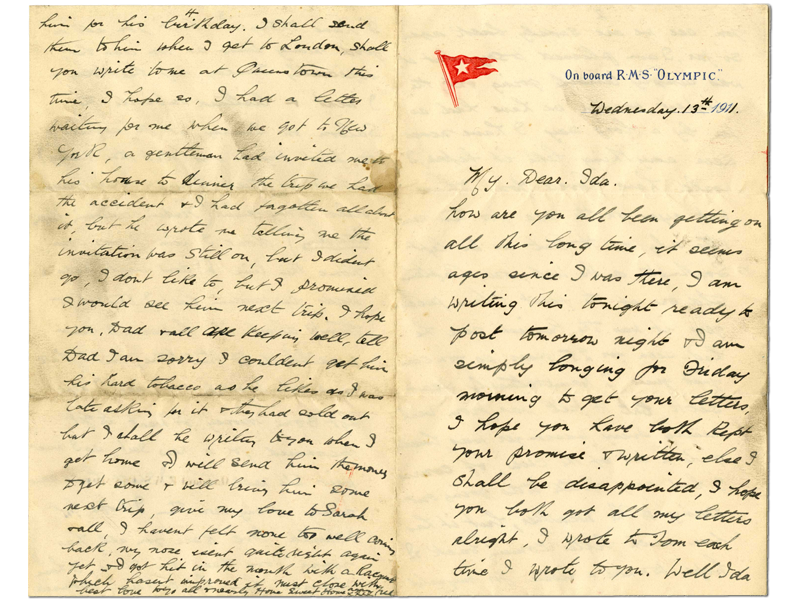 Written on board Olympic, Fred Wright’s letter to his sister mentions Captain Edward J. Smith, the hymns sung in the Sunday church service, and Wright’s interactions with passengers. 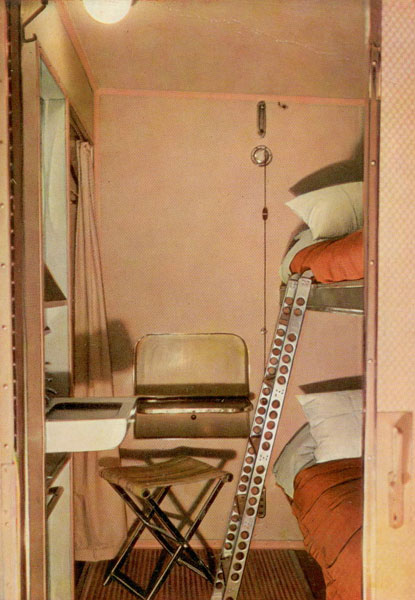 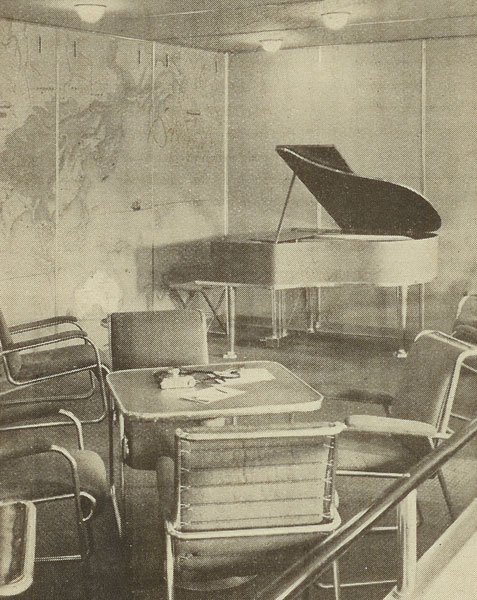 Travelers gathered in Hindenburg’s passenger lounge for card games and music. They enjoyed an aluminum piano in 1936.
Courtesy anonymous 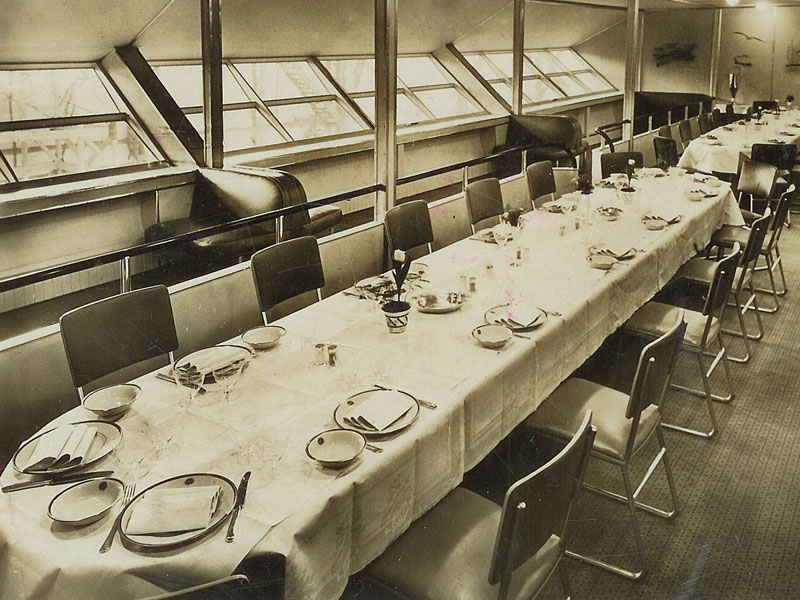 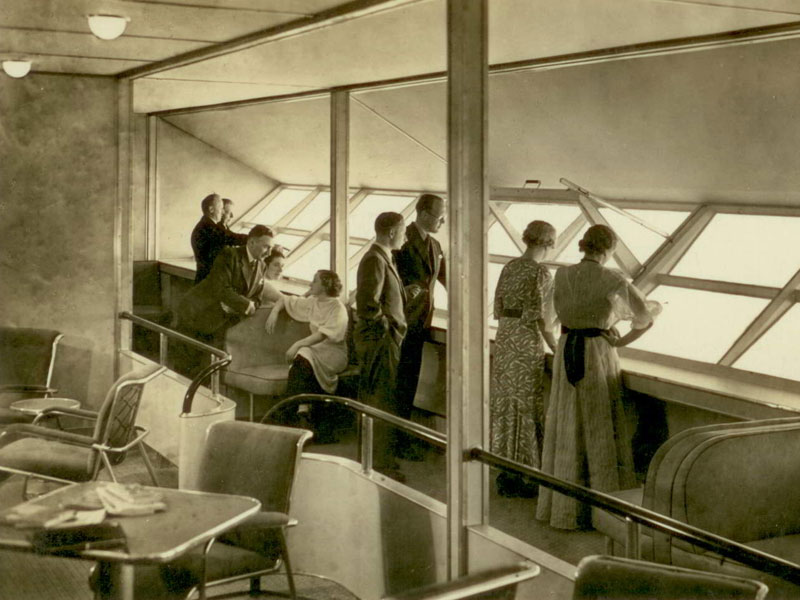 Hindenburg's passenger quarters featured observation windows on both the port and starboard sides that opened for fresh air and taking photographs.
Courtesy anonymous 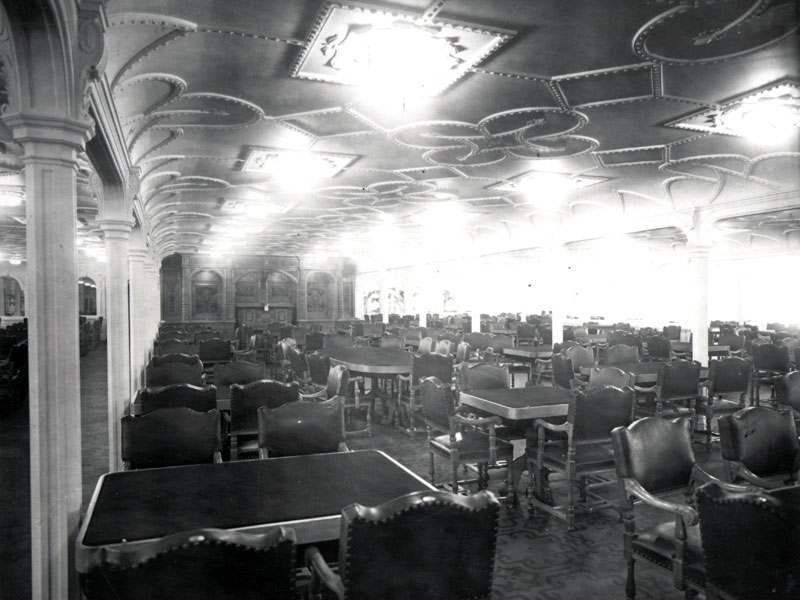 Titanic’s 10,500 square foot first-class dining saloon was the largest room on the ship. It seated 532 passengers at once. 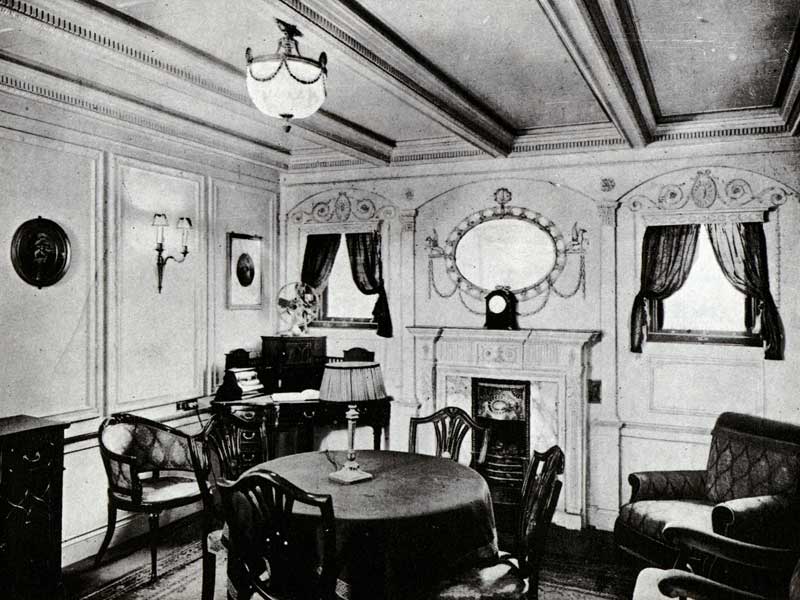 The sitting room of a first-class parlor suite on Olympic and Titanic is decorated in the Adam style. The mantelpiece enclosed an electric heater. 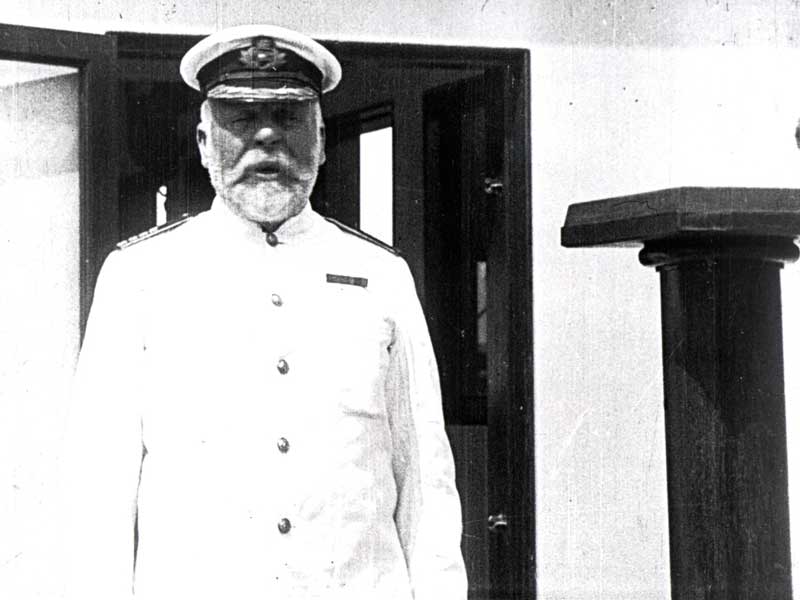 Edward J. Smith, the White Star Line’s most experienced commander, was known as “the Millionaire’s Captain” because some wealthy passengers sailed only on his vessels.
Courtesy Library of Congress

‹ Technologically Advanced up Mail Ships ›
Back to Top