I had been on the grounds crew the previous year, five times.

And all those five times when it came over, it varied very little in its approach

coming over the New Jersey Pines

and then onto the field and making a big turn

and then decending and going down

hooking onto the mooring mast with the help of the grounds crew.

This time we waited

through rain and rain again and then clearing and so

the ship came in, and when somebody hollered, "Here's the ship, here it comes,"

it came out of the New Jersey Pines

and you could see it suddenly appear.

It was going faster, at a greater speed

than at any other time I had seen it.

It was higher in the altitude

than at any other time, and it seemed to be speeding towards the field.

And then it slowed down,

made a big U-turn,

and then started to decend toward the landing crews.

And, uh, I was staring right up captain Pruss who had his gondola window open and

had his elbows on the window sill, looking out surveying this situation.

And I, my thoughts at that time as I looked up,

we were pulling on the rope

and one chief petty officer from the tower of the

What's you other side? -Port. -Port. Thank you.

Port, port, starboard, ... and guiding us and pulling.

this is not a bad job because the future is

still ahead and perhaps someday

the sky will be filled with blimps

that'll be going from country to country and that wouldn't be a bad job, I might

look into that someday,

in few years, not thinking of a war or anything else like that.

Well as every group is pulling all along the line and I'm,

my thoughts I've told her, and then suddenly

somebody in our group said, "Hey, look down at the end there at the tail.

A bunch of fellas are moving, look at, they're running."

I didn't pay any attention.

I said, oh yeah, I don't know, may be possible maybe some oil or gas fell out

and they're running to get away from it.

And, 20-30 seconds went by, and then closer to the middle

of the ship another group or two started running

and I said, "Boy they must be, must be something wrong."

Oil or gas or something.

It was actually, it was not hydrogen

but if it were a form of a chemical

that's what it would have been.

So, I, ignorant about the whole thing, I start pulling with other men,

and others started running, and then suddenly,

the ship made a very precipitous drop right above us,

about 150 feet, or something like that, not much higher.

And somebody said, "Hey, oh look the fire!"

"Look at everybody running!" So, I woke up with others,

and being young, it didn't take me long to lead the pack running.

And so I said, "Holy cow let's get outta here!"

So we ran, everybody scattered quickly.

and then we heard this eerie

sound when the metal of the ship

hit the ground, the mud, and it started

crackling, and the fires burning along,

and very heavy black smoke, and the coverage,

the fabric is burning very quickly.

And so, when I heard all this, the eerie sound from when it hit and so on,

that brought me to a quick stop

and I turned to see what had taken place.

And these people, especially the civilians

who had paid the price of the ticket,

You can't really use the right word, but they were grabbing the metal,

and then falling because the metal was just red-hot.

It had turned red from the,

naturally the fire and so on, canvas fabric had burned quickly.

and they were falling, man in civilian suits who had paid.

One gentleman, middle-aged man, had held onto his briefcase.

He wouldn't let go of it, and he stumbled over the metal trying to get out.

A lady did the same thing,

grabbed a hold of the metal and

just, her hands I guess started to burn, fell.

Others were coming out.

What do you do in a situation like that?

And the the Chief Boatswain's Mate who was

the announcer giving order from the tower was yelling out,

"All crewmen", not crewman but the grounds crew,

"standby, Navy get in there and help Navy men, Marines, help!"

And there was not a large number Marines or sailors at that base.

So, they moved forward as best they could with the heat and all.

The civilians, myself and others, did not pay much attention to his orders and we moved forward as well.

But you couldn't get too close.

People were coming out burning, their clothing, and then falling in the mud

because it had rained heavily that day.

Puddles of mud and water, and it was a horrible sight to see.

Frank, I have a little surprise for you.

I went to the National Archives in College Park, Maryland

to investigate the Hindenburg Investigation Papers.

And, in addition to the testimony of everyone who was before the board,

they had a lot of documents that they had prepared in advance including documents from ground crewmen.

So here's one of those forms. Can you tell me the name at the top on the form?

That's right, and so the first question says,

state your position in relation to the ship, including the distance from the ship.

And how did you answer that?

And in addition to these questions they asked you,

they gave you a form to fill out with a diagram of the Hindenburg.

And they asked you to mark where you were standing under the ship.

And you can see, you put an "X" right here on the Starboard bow side.

Everybody used to say,

"Gee I guess when you returned the next day you were a big hero," this, that, and the other.

and the ones that I do remember very much

mentioning it, when I went out on field

the next day for track and baseball, that followed,

both coaches chewed me out,

"Where were you yesterday?"

And I said, well, "I went to pull the Hindenburg down."

"No I didn't know about it. You could at least tell somebody,"

and, this, that, and the other, and blah blah blah.

ha, ha, 'cause they chewed me out for missing practice.

In 1937, Frank Ward was a high school student and one of the youngest civilians of the Hindenburg landing crew. Watch this video interview to share his experience as he held one of the mooring lines at the moment of the disaster. 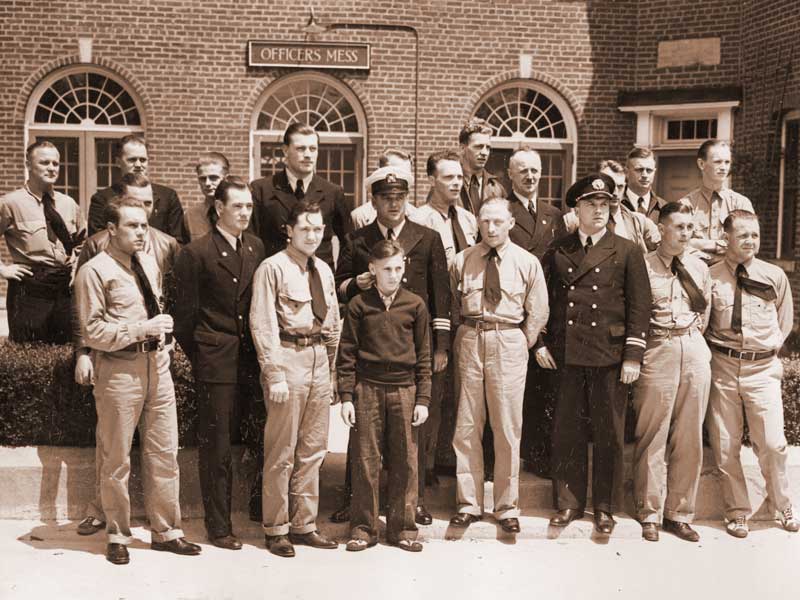 “In the gondola there was an oppressive calm; some crewmen were groaning, others fell to the floor and everyone attempted to hold onto something as the pitch became steeper.”

Bauer, a young Hindenburg captain, controlled the water ballast during the final approach. He tried to level the flaming ship to soften its landing. At the instant the landing wheel bounced, he jumped from the gondola’s portside window and ran to a place of safety. He suffered minor burns but returned to rescue passengers. After the disaster, Bauer worked in aviation and automobile industries.

“When the next Zeppelin is ready, may I fly again with her?”

When the flaming Hindenburg sharply tilted, water from a ruptured ballast miraculously drenched fourteen-year-old cabin boy Werner Franz. Soaked and briefly protected from the flames, he kicked open a supply hatch and jumped. The gondola’s bounce provided the seconds he needed to escape the conflagration virtually unharmed. Franz spent his life after World War II working with precision instruments.

“The most remarkable thing that I know in my life, I took metal rods an inch thick in my hands and I broke them. They broke like paper.”

Armour Meat Packing executive Nelson Morris and business associate Burtis J. Dolan, both from the Chicago area, had watched lightning from the starboard passenger lounge before Hindenburg’s stern dropped sharply. The friends jumped from the flaming ship into a fiery tangle of girders. Morris survived, but Dolan became fatally trapped in the wreck. Morris secured financial support for Dolan’s family.

“Each day it was more difficult to ignore the pettiness, artificiality and frothy gaiety that encompassed a stewardess’ life aboard ship.”

Two weeks after the Titanic disaster, Jessop returned to the sea as a stewardess aboard Olympic. In 1916, as a World War I nurse, she survived the sinking of Titanic’s sister ship, HMHS Britannic, in the Aegean Sea. Jessop jumped from her lifeboat right before Britannic’s still-turning starboard propeller smashed it to pieces. She retired from shipboard service in 1950.

“There were vast differences of people's wealth on the ship, and I realized later that if we hadn't been in second-class, we’d have died.” –Michel Navratil

The toddler Navratil brothers were placed in Titanic’s last lifeboat and arrived in New York as “Louis and Lolo, the Titanic orphans.” When their mother spotted their photograph in a French newspaper, it was learned that they had been kidnapped by their father and were traveling under assumed names. From 1992 until his death, Michel (left) was Titanic’s last male survivor.

“I never allowed my thoughts to dwell on . . . those ghastly moments.”

Lightoller supervised the launch of Titanic’s port side lifeboats. After the vessel sank, he clung to an overturned lifeboat until rescued. As Titanic’s senior surviving officer, he gave crucial testimony at the British and American inquiries. Lightoller commanded three Royal Navy ships during World War I, but the White Star Line never promoted him to captain because of his association with the Titanic disaster.