Let the black man get upon his person the brass letters U.S., let him get an eagle on his button, and a musket on his shoulder, and bullets in his pocket, and there is no power on earth or under the earth which can deny that he has earned the right of citizenship in the United States.
—Frederick Douglass, Should the Negro Enlist in the Union Army?, 1863

The idea of an entirely African American squadron in the Army Air Corps seemed far-fetched at a time when there were only a handful of black pilots in the entire country. However, Tuskegee Institute had operated a federally-funded training program for black pilots since 1939, so when just such a squadron was authorized by the War Department it was based there. Lieutenant Colonel Noel F. Parrish, the unit’s third white commander, was directly responsible for ensuring the Tuskegee Airmen’s many successes.

One of the first all-black Marine units, the 3rd Ammunition Company’s meritorious performance in the 1944 Battle of Saipan earned them a Presidential Unit Citation and won praise from senior white commanders, softening opposition to African Americans in the military.

Longtime NAACP Executive Secretary Walter F. White served as a war correspondent for several publications, including the New York Post. He reported on the contributions of black military personnel and the discrimination they faced in the service. His book A Rising Wind figured in President Harry S Truman’s 1948 decision to desegregate the military. 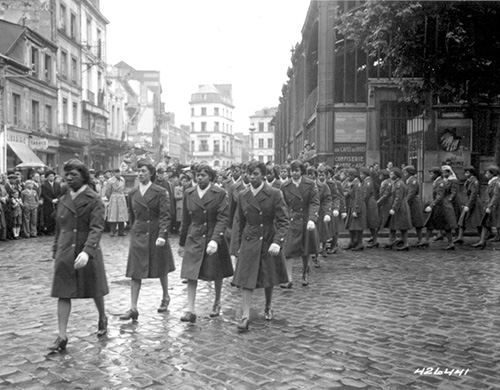 This is Francoise Bonnell, the director of the United States Army Women’s Museum, and I’m calling in from Fort Lee, Virginia. This photo shows the 6888th Central Postal Battalion, the only unit of African American women of the Women’s Army Corps to be sent overseas during World War II, marching in a parade in Rouen on May 27, 1945. Under the command of Major Charity Adams, who later became a Lieutenant Colonel, the group had arrived in England in February of 1945 and was reassigned to Rouen, France four months later. These 840 women redirected mail to over 7 million U.S. personnel in the European Theatre of Operations. They worked three eight-hour shifts, seven days a week, averaging 65,000 pieces of mail per shift, to clear out the tremendous backlog of mail much of which were items for Christmas but had not been delivered on time. In Rouen, the battalion had over 200 French assigned to work with them. Charity Adams remarked that this created a unique relationship with the citizens of Rouen. She said, “We represented the United States government, which was white in their minds, but we were black.” But nonetheless, the citizens of Rouen were curious about them and also very friendly. It was not uncommon for American military units to parade in European towns as they were liberated or on special occasions. The women in this photo are marching through the center of town crossing over the place where Joan of Arc was burned at the stake in May 1431, parading in honor of this French heroine. Undoubtedly, the WACs of the 6888th were also celebrating the fact that the parade fell on Memorial Day for the United States.

One of the first African American women officers in the Women's Army Corps during World War II, Roundtree was a tireless recruiter. The WACs included the 6888th Postal Battalion, an all-black, all female unit deployed to England and France to clear a backlog of undelivered military mail addressed to soldiers at the front.

The U.S. military’s V-Mail (short for Victory Mail) system involved photographing letters to military personnel, then sending the microfilmed negatives to be developed and delivered in the field. This V-Mail microfilm strip contains a letter from a Howard University student to her husband in the navy.

Freedom Just Around the Corner

The 6888th: Women Who Managed the Military’s Mail

Military
‹ Segregation - Postal up Civil Rights Movement ›
Back to Top