Simon Wiesenthal left behind many legacies. When he closed his first document center in 1954, he contributed tens of thousands of archival pages to Yad Vashem, the Israeli Holocaust memorial. In 1977, he agreed to lend his name to the Simon Wiesenthal Center in Los Angeles, which operates today in seven cities around the world. The center's Museum of Tolerance maintains materials about Wiesenthal online and in exhibits.

The memory of Wiesenthal's lasting enthusiasm for stamp collecting is also, in a sense, a legacy for philatelists. Wiesenthal's interest in stamp collecting was well-known during his lifetime. Just as his doctor suggested in 1948, his peaceful pursuit of stamps by night became a healthy contrast to the violence he documented by day.

In 1985 and 1988, stamp shows in Israel presented the Simon Wiesenthal Award for Holocaust-related stamp collecting, sponsored by his daughter Paulinka and her husband. The winner of the 1988 cup was Ari Stempler for his collection of Israeli postal history of the Holocaust. Wiesenthal's own stamp collection was auctioned in 2006, the year after his death. 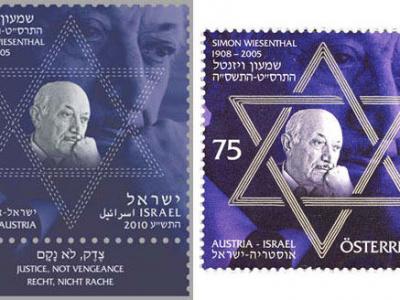 ‹ Germany up Wiesenthal Joint Issue ›
Back to Top