“For over a century the Postal Service has commissioned artistic works to enliven its stamps, enrich the mailing experience, bring art to its Post Offices, and help educate, inform and delight the American public. We are proud of our history, and that Postal art is popularly recognizable and generally considered part of the ‘Americana’ that makes up our cultural experience.”
–United States Postal Service

About Indians at the Post Office and Murals as Public Art

In 1934, during the era of the New Deal, the Section of Painting and Sculpture of the Treasury Department, in a non-relief effort, established a “48 States” art competition to commission artists to create public art in post offices. All of these visual stories, created as a result of this national contest, were the work of mostly non-Native artists whose chosen themes were also influenced by the desires of local post office communities. Many of the artists were unfamiliar with the region connected to the post office they were assigned, and most, unless they were Native artists themselves, were unfamiliar with American Indian culture. While some mural images succeeded in capturing the importance of Native peoples in the American historic tableau as a result of an increased national consciousness, others were based on rumor, legend, and stereotype resulting in dramatic and sometimes bizarre inaccuracy. Post office murals across the United States are telling and re-telling these American Indian stories to the general public every day.

In early 2013, A History and Culture Research group at the Smithsonian National Museum of the American Indian examined the 1,630 black and white images of post office murals and sculptures which were loaned exclusively to the NMAI on archived discs by the United States Postal Service. The NMAI team created notebook printouts of all of these murals in black and white, which can now be available to researchers. The review effort showed that 400 murals contained images of American Indians. Only 24 of these were created by American Indian artists. A very few of the 400 have been professionally photographed in color and from a pleasing angle; an issue we hope to address through grant applications and the good will of local historical societies. Until then, we will offer you what we can gather.

The long-range goal of this project titled Indians at the Post Office: Native Themes in New Deal-Era Murals, is to critique, from a contemporary vantage point, all 400 of these murals. The purpose is to address both the virtues and the inaccuracies in these historic depictions, and to launch and continue to populate a web-based virtual exhibition on the Smithsonian National Postal Museum website. Our focus is to eventually have all of the mural research essays written by American Indians through collaborations with tribal and state college faculties and students, particularly from the areas and cultures depicted within the murals.

In an on-going effort to challenge stereotyping, and correct the current nature of education concerning American Indians, the NMAI will devote the required scholarship to inform and assess these permanent visual statements. 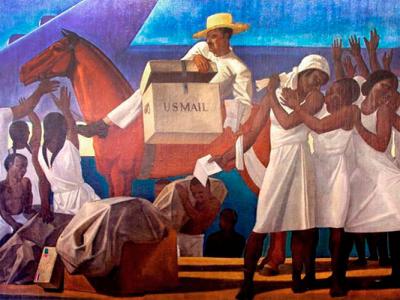 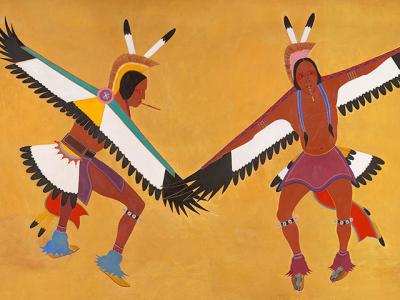 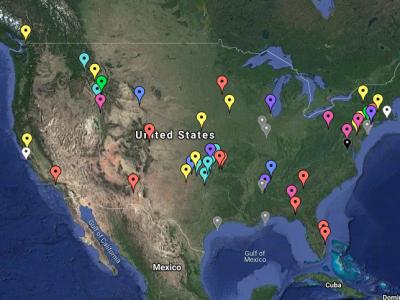 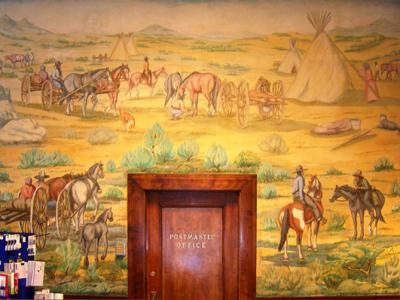 About the Virtual Exhibition

Learn more About About the Virtual Exhibition