A republic occupying the Isthmus of Panama, between North and South America. The area was a department of the Republic of Colombia until 1903 when U.S. intervention enabled the Panamanians to secure their independence. The new Panamanian government immediately conceded to the United States a 10-mile wide strip of land bisecting the isthmus. Construction of the Panama Canal began the following year and was completed in 1914. While the Panamanian economy benefited greatly from the Canal, the presence of a foreign sovereignty on their soil was a constant irritant to Panamanians' national pride. During 1964-77, U.S.-Panamanian relations deteriorated over the status of the Canal, which became an emotionally charged issue throughout Latin America. In 1978 a revised Canal treaty was ratified by the U.S. Senate. Implemented in 1979, this treaty provides for the gradual transfer of authority, with full Panamanian ownership by December 31, 1999. Panama assumed political sovereignty in the Canal Zone on Oct. 1, 1979. During the 1980s, Panama was under the control of Gen. Manual Noriega. Noriega's repression of political opposition and involvement in drug trafficking led to increasing conflict with the United States during 1986-1989. U.S. forces invaded Panama, deposed Noriega, who was returned to the United States for trial, and installed a government led by the Noriega opposition.

A strip of land 10 miles wide lying on either side of the Panama Canal, from the Atlantic to Pacific oceans, dividing the Republic of Panama into two parts. Thwarted by Colombia from building the Panama Canal through its territory, the U.S. supported the Panamanian revolution of 1903, and almost immediately received a perpetual lease to the territory. In 1978, the United States and Panama agreed to a revised treaty, allowing for the gradual transfer of control of the Canal to Panama by the end of the century. On Sept. 30, 1979, the U.S. Canal Zone Postal Service ceased operation, and on Oct. 1, the Panamanian Postal Service took charge. 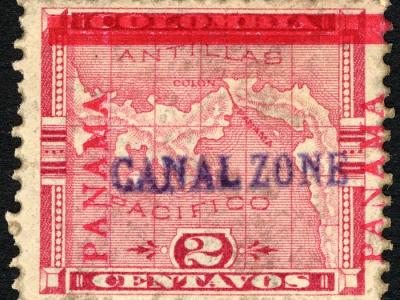 Visit this virtual exhibition to learn about Canal Zone stamps.

A republic occupying the Isthmus of Panama, between North and South America. The area was a department of the Republic of Colombia until 1903 when U.S. intervention enabled the Panamanians to secure their independence.