In ancient times France was part of the Celtic territory known as Gaul or Gallia. Its present-day name is derived from the Latin 'Francia', meaning 'country of the Franks.' This refers to the Germanic people who conquered the area during the fifth century, at the time of the fall of the Western Roman Empire. France became a separate country in the ninth century.

Until the eighteenth century, France was a feudal monarchy and a world power. At the end of the eighteenth century, peasants and the emerging business class overthrew the monarchy and ended feudalism in what is known as the French Revolution. During the nineteenth century, the French Revolution spawned the First Republic, which was in turn overthrown by Napoleon I. Restoration of the monarchy in 1815 ended the First Napoleonic Empire. The Revolution of 1848 created the Second Republic, but that was quickly replaced by the Second Napoleonic Empire in 1852. That Empire lasted until the disastrous Franco-Prussian War of 1870-1871, when the Third Republic rose from the ashes of a defeated France.

France has experienced numerous crises during the twentieth century, including the devastation of two world wars, political and social upheavals, and the loss of a large colonial empire in Indochina, Algeria, and West and Equatorial Africa. The current government of France is the Fourth Republic, formed at the conclusion of World War II.

France issued its first postage stamps in 1849, during the Second Republic. Initial postage stamp designs were republican in nature, featuring Ceres, the goddess of agriculture. With the advent of the Second Napoleonic Empire, stamp designs featured the head of Napoleon III until 1870, when they returned to republican themes. Subsequent designs included Ceres (1870-76), Peace & Commerce (1876-1900), Liberty Equality & Fraternity (1900-29), and the Sower (1900-23). From that point forward, stamp designs have been primarily commemorative in nature.

France controlled a vast array of colonies all over the world until 1945. France issued postage stamps for all its colonies, and this is a major area of philatelic interest. Interestingly, the first postage stamps for many of today's independent nations were overprinted French stamps from the colonial period. In addition, France maintained many post offices abroad and steamship lines to support their far-flung commercial activities. Postal markings from these foreign offices and steamship routes also represent an area of significant philatelic interest.

The philately of twentieth-century France has recently become quite popular, as the history of two world wars and great political change have created a rich philatelic legacy. 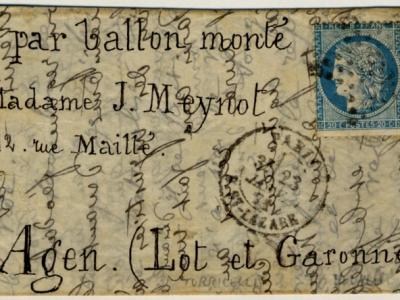 Henry A. Meyer Collection of French Revolution and Napoleonic Covers and Documents

John Lennon's Stamp Album Pages 76 & 77 The Henry A. Meyer Collection of French Revolution and Napoleonic Covers
‹ Belgium up Siege of Paris Mail ›
Back to Top