Soon after the Civil War began in April 1861, hundreds of private printing firms in the North and South began printing patriotic images and cartoons supporting their respective sides in the conflict on envelopes (covers) and letter sheets. These were then in turn sold to patriotic customers. Most of these depictions were printed on the left side of the envelopes. The following five patriotic envelopes are an exception utilizing the entire front of the envelope to showcase their pro-Union cartoons. Most people who used these patriotic envelopes to send letters wrote the address and applied the postage stamp on the reverse side of the envelope.

The “1st Round” envelope depicts President Lincoln and the Confederate President Jefferson Davis in a roped off ring. Lincoln stands tall proclaiming, “I use no more force than necessary,” while Davis cowers saying, “Let me alone.” The characters and objects surrounding the central image on the envelope provide additional political satire and imagery. Lincoln’s main man in his corner is Secretary of State Seward while Brigadier General Beauregard, an early prominent Confederate States general stands at the ready for Davis. Behind Davis’s supporters are two other groups of spectators, slaves and the Europeans. In the early period of the Civil War, European powers considered providing various levels of support to the Confederacy.

The “2nd Round” envelope depicts the fight. Lincoln has beaten Davis back and in the process ripped his pants. “Go back you dog to the junction I’ll call on you there soon,” demands Lincoln. Davis turns to General Beauregard and recommends in distress, “Beauregard, let’s fall back on Richmond.” Davis’s discontented supporters remain but notice the joy of the three slaves behind them at Lincoln’s initial success. The Europeans in the top right corner comment, “We are traveling into rough waters.” 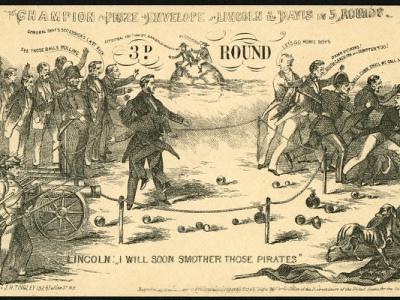 Learn more About The Fight Continues

‹ Lincoln Consults His Cabinet up The Fight Continues ›
Back to Top