Those who deny freedom to others, deserve it not for themselves.
—A. Lincoln

Abraham Lincoln’s national stature increased greatly following his 1858 US Senate race against Stephen Douglas. This new celebrity status was particularly evident among Republican Party members. Throughout 1859, Lincoln received numerous invitations to speak to crowds all over Illinois and the Midwest.

On April 6, 1859, Lincoln wrote a letter to a group in Boston celebrating Thomas Jefferson’s birthday. The primary addressee was H.L. Pierce, a political activist from Boston and a future Republican US congressman. In the letter, Lincoln declined the group’s invitation to attend the festivities, but the correspondence also included remarks on the ironies of the transformation of America’s political parties and concluded with some thoughts on the issue of slavery. “This is a world of compensations; and he who would be no slave, must consent to have no slave. Those who deny freedom to others, deserve it not for themselves; and, under a just God, can not long retain it.” This quote includes some of Lincoln’s most famous words on the topic of human freedom before coming to the White House. 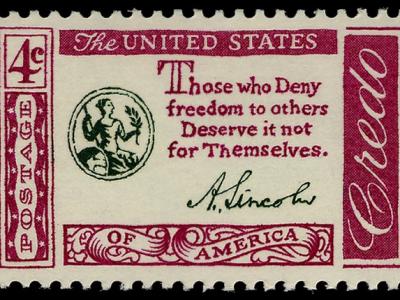 Honoring Lincoln in His Own Words

Learn more About Honoring Lincoln in His Own Words