These brightly colored red, white and blue buses were common sights on American highways in the 1950s and 1960s. Clerks inside were hard at work sorting mail as the buses traveled between towns across the country. The system of sorting mail while in transit grew out of the Railway Mail Service, which Highway Post Office Service was created to replace. Buses helped fill the transportation void left by declining railroad traffic.

The first Highway Post Office bus was built by the White Motor Company of Cleveland, Ohio. On February 10, 1941, this vehicle inaugurated service between Washington, D.C., and Harrisonburg, Virginia, a distance of 149 miles. This bus is now part of the National Postal Museum collection. After the bus was decommissioned in the 1960s, a postal worker hid it in a succession of Post Office Department garages to keep it from being discarded as surplus. It was finally "discovered" and sold by the government. In 1961, it was purchased by the members of the United Federation of Postal Clerks (which later became the American Postal Workers Union), who donated it to the Smithsonian Institution and agreed to underwrite the cost of restoring the bus to its proper condition.

The interiors of Highway Post Offices were largely indistinguishable from the Railway Post Offices they replaced. On the left side were the letter cases and the letter distributing table. On the right side of the bus was the paper distributing table and holders for mail sacks. Windows were barred on the outside in addition to being screened on the inside to provide security. Electric ceiling lights provided illumination for the clerks. The rear section of the bus had an average of 640 cubic feet of space which could hold an average of 150 mail sacks.

The expansion of the Highway Post Office system was postponed during World War II. A second route was not established until 1946. For roughly the next decade, as railway mail service shrank, highway mail service grew. In the period from 1960-1963 the railway mail service was replacing an average of 20 trains a month. Highway Post Office routes were organized on round trips which averaged about 150 miles each way. There was a very good reason for this, as the bus generally could only hold enough gas for about one 150 mile trip, and fuel stops meant losing valuable time. Furthermore, if a trip was too long, garages to service the vehicles had to be set up at both ends of the trip, doubling that cost.

Highway mail routes generally served an average of 25 post offices directly and many others indirectly through Star Route and railway mail connections. The end of the Highway Post Office system was signaled by a major reorganization within the Post Office Department—the adoption of the sectional center concept. Under this reorganization, mail handling was divided into sections of the country. Mail was sent to a central location, where it was processed by high-speed sorting machines. On June 30, 1974, 33 years after the first experimental trip, the last Highway Post Office made its final run over the Cincinnati-Cleveland, Ohio route. Ironically, although Highway Post Offices were introduced to replace railway mail trains, Railway Mail Service outlasted Highway Post Office Service by three years. 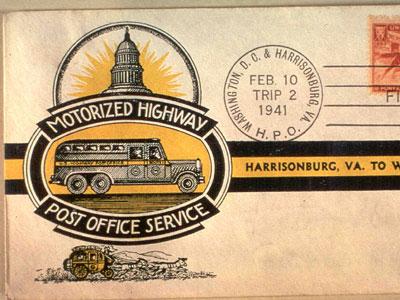 See some of the envelopes carried on Highway Post Office bus inaugural trips.