Technological innovations have transformed the way personal messages and official mail have been sent. Mail options expanded in the 1940s to include recorded messages and microfilmed letters. Today, computer technology allows electronic communication to be combined with traditional letters and packages in new ways.

The volume, size, and weight of mail has typically increased during wartime. Developing new procedures, trying different routes, and using diverse means of transportation are all ways that the postal system has continued to expand its capacity to meet the needs of military personnel and their communities.

Male Voice: Hello, Mrs. Rice.  The Pepsi Cola Company is very happy to bring you the voice of your son from Fort Belvoir, Virginia.

Private Warren Gerstenkorn:  Hello, mom.  It’s swell to get this chance to talk to you again; cheaper than a long distance phone call, too, and it'll last much longer, but I sure would like to hear your voices once more.

There isn’t much to report that I haven’t said in my letters but I thought of you very much anyway.  Same old routines from revelry to test, movie, letters and a show once in a while.  The funny thing though, I sort of like it all, but I hope you both feel as well as I do.  They keep me too busy to get homesick here, but I sure would like to see you all right now.  Your letters bring my happiest moments.  I guess you have to be a soldier to realize what I mean.  Mail call is the happiest or the satisfying part of the day for everyone.  So you keep me happy and everything will be swell.

How about that camera one of these days?  I'm still waiting for it.  Remember me to everybody and tell them all to write. I’ll answer as soon as I can, though time is very precious here on the island.  Be sure to write and let me know how I sound.  You can play this record over and over while I’m away.  Other boys like to talk to their folks, too.

So, so long for now and goodnight and God bless you all.

Female voice: Greetings, Mr. and Mrs. Sides. This is July 21st, 1944. We are speaking from the USO in the Pacific Mutual Building in Downtown Los Angeles. Through the courtesy of Gem blades and razors, I have the privilege of bringing you the voice of Gem. Here he is.

PhM 2/C Ralph Miller: Hello, Mother. My gosh, almighty. Here I am making one of these here records up here in Los Angeles. Just got up here a little while ago, and it's just some real town up here, having a lot of fun up here. Going up to Hollywood tomorrow. Right now I’m at USO where I’m making this record. We’ve got a very beautiful girl here. Say hello, honey. Say hello to them, go ahead. There’s my mother.

Ralph Miller: Isn’t that nice, huh? We’re going to have a lot of fun tonight. Yes, indeed. Well, I’ll tell you why I called the other night. You know, I told you on the phone it was just because I was a little stewed or something, but it wasn’t true. The reason I called you the other night was to tell you I was trying for a 30-day leave; however, it didn’t go through. The doctor wouldn't pass it -- you know, my doctor passed it, but the captain wouldn’t pass it as yet. However, I’m going to still try and get a leave before I ship out this time. They tell me it’s pretty hard to get out of California though because of train transportation and everything else, but I’m still going to try and maybe I’ll be home before even this war is over and back after the war is over, I hope.

Ralph Miller: Okay, we’re back on the air again she says, so I have to start talking again. They stopped the music on me now. Everybody can hear me. Even the girl over here, she’s reading something and smiling. I don’t know what to think about that, though. Where are you planning this out, out of Pearls [phonetic], I guess? Well, how’s everything at the cottage, down there at the boat and everything? My gosh. I’ll be glad to get back home again and take life easy. I don’t know. This L.A. weather has got me under the skin here; I'm beginning to get a small cold in throughout the nostrils, going to need the pharmacist made for myself here pretty soon.

And so it’s a very nice state though, a very good state. I like the way it’s laid out. I don’t know how long it’s been dead, but I like the way it’s laid out. No kidding though, they got cockroaches so big they wear hash marks. You have to salute them when they go by. One turned my dog tag over last night to see what type of blood I had. It’s a wonderful town, a wonderful town. They got two laughs out of that, that’s more than I got in Philadelphia.

But really, I don’t know what to say now that I'm on this doggone thing. Besides, it’ll probably be picking up another ship before long, probably another LSD too and be shoving out. Oh yeah, don’t go hold your breath waiting for that because I might be back and be taking life easy for the rest of the duration. No, there's nothing the matter with me. I’m in perfect condition. Nothing’s the matter with me at all besides a little lovesick. You know how things get you down here once you come up here to a USO and see a couple of little girls smile at you like this here, you wouldn't know, there smiling at me [indiscernible] I don’t know what I can do. Well, somebody is waving a pencil so I have to shove off here any minute now. Be good, mother, and God bless you all. 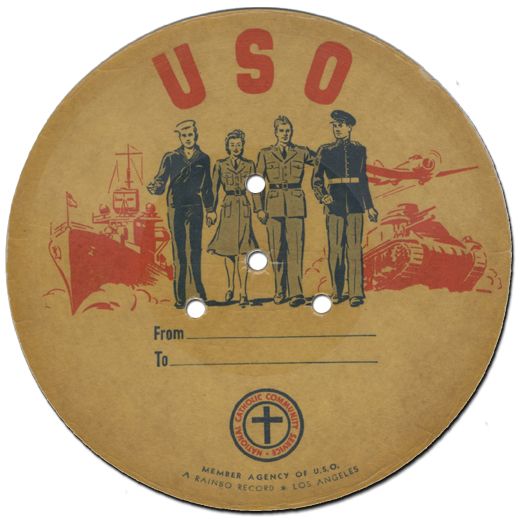 During World War II, military personnel could record a message onto a phonograph album and mail it home.

A reasonably reliable mail service allows service personnel to stay connected with those at home. Even in 1835, Navy surgeon David Shelton Edwards was able to manage his New York household despite being stationed far from home at the Pensacola Navy Yard in Florida. Through frequent correspondence with his wife, Edwards remained involved with his family and sent orders regarding the running of the house.

“My heart tells me I shall get a letter from you this evening unless the late heavy rains have so overflowed the country in Georgia as to stop the mail.”
—Surgeon David Shelton Edwards to his wife, June 22, 1835 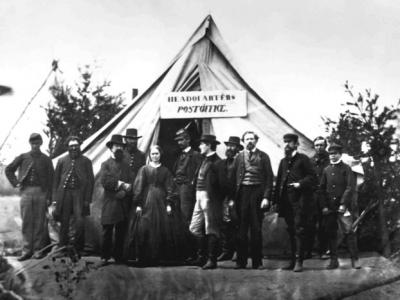 America’s revolutionaries recognized that the exchange of information was essential to their cause. The Continental Congress established the Constitutional Post on July 26, 1775.

Learn more About The Early Years 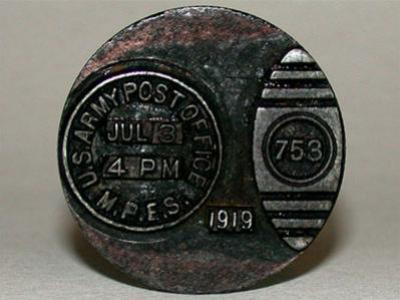 During World War I, the postal system experienced unprecedented growth. Between July 1, 1917 and June 30, 1918 the Post Office Department dispatched 35 million letters to the American Expeditionary Forces. 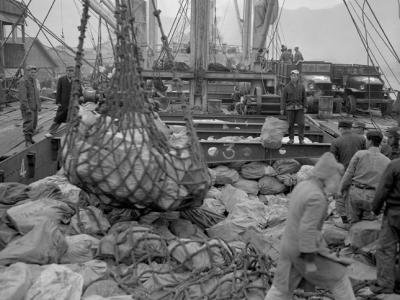 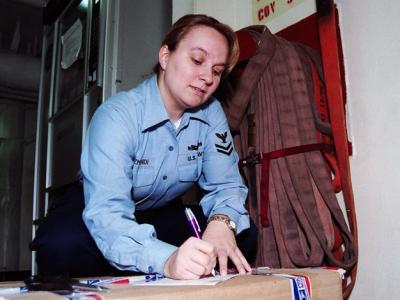 Despite the availability of electronic communication, mail remains relevant to service men and women.

A sailor prepares a package aboard the USS Theodore Roosevelt to send to the U.S., 2002. U.S. Navy photo by Photographer's Mate 3rd Class Sabrina Day

‹ The Field Post Office up The Early Years ›
Back to Top