Mechanic Clyde Eoff had been in Germany for five months as part of the US army of occupation. Eoff wrote his sister about preparing to return: “America seems just like a dream and home is a word that we hardly [realize] the meaning of.” He masked mixed feelings with humor, writing that he would miss the equipment as he would his friends. His unit had maintained artillery and vehicles through several major battles. 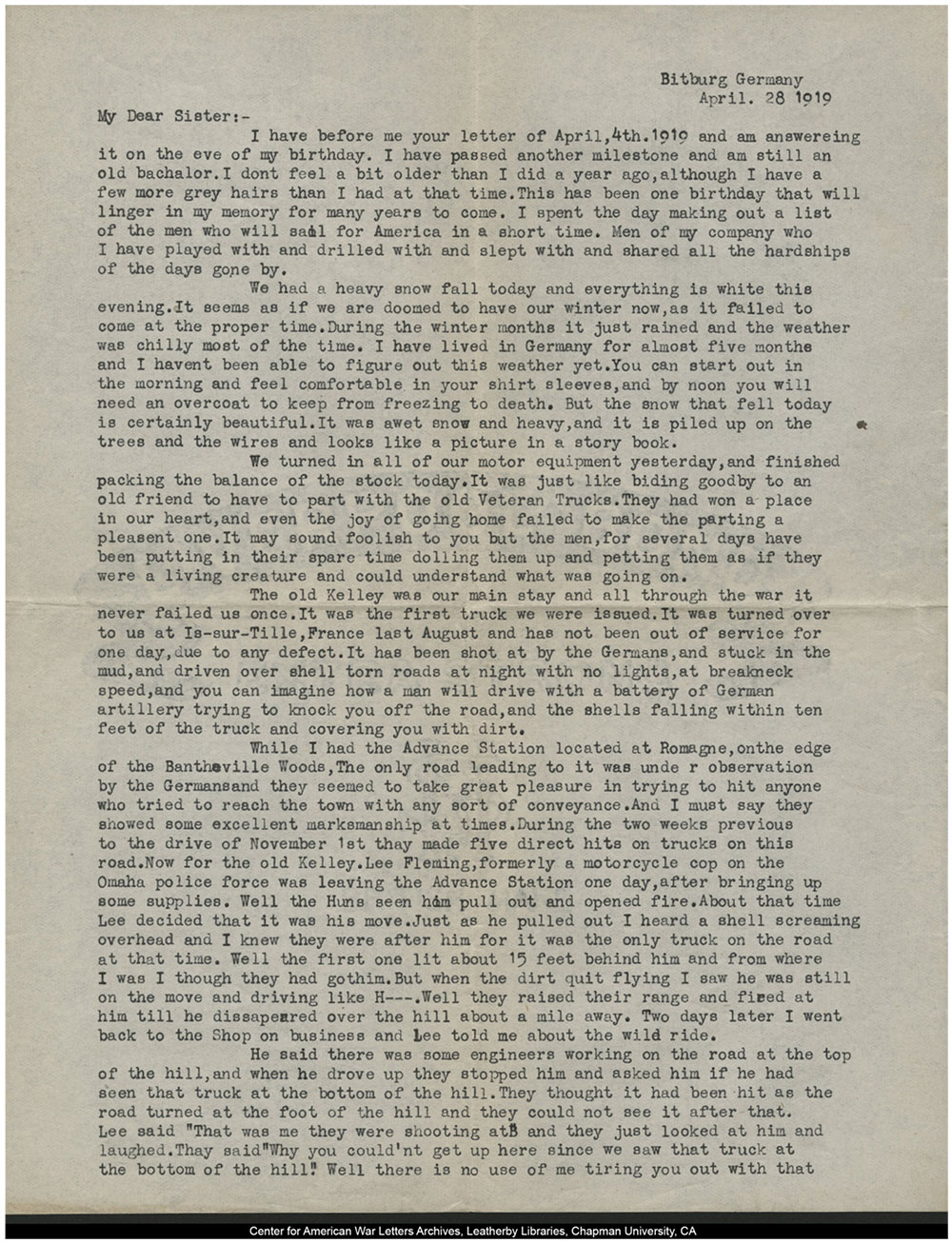 I have before me your letter of April, 4th. 1919 and am answereing it on the eve of my birthday. I have passed another milestone and am still an old bachalor. I dont feel a bit older than I did a year ago, although I have a few more grey hairs than I had at that time. This has been one birthday that will linger in my memory for many years to come. I spent the day making out a list of the men who will sail for America in a short time. Men of my company who I have played with and drilled with and slept with and shared all the hardships of the days gone by.

We had a heavy snow fall today and everything is white this evening. It seems as if we are doomed to have our winter now, as it failed to come at the proper time. During the winter months it just rained and the weather was chilly most of the time. I have lived in Germany for almost five monthes and I havent been able to figure out this weather yet. You can start out in the morning and feel comfortable in your shirt sleeves, and by noon you will need an overcoat to keep from freezing to death. But the snow that fell today is certainly beautiful. It was awet snow and heavy, and it is piled up on the trees and the wires and looks like a picture in a story book.

We turned in all of our motor equipment yesterday, and finished packing the balance of the stock today. It was just like biding goodby to an old friend to have to part with the old Veteran Trucks. They had won a place in our heart, and even the joy of going home failed to make the parting a pleasant one. It may sound foolish to you but the men, for several days have been putting in their spare time dolling them up and petting them as if they were a living creature and could understand what was going on.

The old Kelley was our main stay and all through the war it never failed us once. It was the first truck we were issued. It was turned over to us at Is-sur-Tille, France last August and has not been out of service for one day, due to any defect. It has been shot at by the Germans, and stuck in the mud, and driven over shell torn roads at night with no lights, at breakneck speed, and you can imagine how a man will drive with a battery of German artillery trying to knock you off the road, and the shells falling within ten feet of the truck and covering you with dirt.

While I had the Advance Station located at Romagne, onthe edge of the Bantheville Woods, The only road leading to it was unde r observantion by the Germans and they seemed to take great pleasure in trying to hit anyone who tried to reach the town with any sort of conveyance. And I must say they showed some excellent marksmanship at times. During the two weeks previous to the drive of November 1st thay made five direct hits on trucks on this road. Now for the old Kelley. Lee Fleming, formerly a motorcycle cop on the Omaha police force was leaving the Advance Station one day, after bringing up some supplies. Well the Huns seen him pull out and opened fire. About that time Lee decided that it was his move. Just as he pulled out I heard a shell screaming overhead and I knew they were after him for it was the only truck on the road at that time. Well the first one lit about 15 feet behind him and from where I was I though they had gothim. But when the dirt quit flying I saw he was still on the move and driving like H---. Well they raised their range and fired at him till he dissapeared over the hill about a mile away. Two days later I went back to the Shop on business and Lee told me about the wild ride.

He said there was some engineers working on the road at the top of the hill, and when he drove up they stopped him and asked him if he had seen that truck at the bottom of the hill. They thought it had been hit as the road turned at the foot of the hill and they could not see it after that. Lee said “That was me they were shooting at” and they just looked at him and laughed. Thay said “Why you could’nt get up here since we saw that truck at the bottom of the hill.” Well there is no use of me tiring you out with that [page break] ancient history, but I just wanted to recall one of the many little episodes in which the old Kelley took part.

Now to get back to the present time. The the snow is still on the trees and it is still my Birthday and I am still in Bitburg Germany. A few more days will see us all ready for the word to start on our way, and we will not shed any tears of sorrow. America seems just like a dream and home is a word that we hardly realise the meaning of. I will have to get aquainted with my own family all over again. But I wont remain a stranger very long. Oh, No.

So Dad tried to scare you did he! Well you might know that would be the way he would break the news. But I am all right now and none the worse for the experience. I will have to jump on his neck when I get back. And the thumb is about well to although it is still a little sore.

Speaking of the old Hudson I have a suggestion to make. Suppose we just wait till I get back and look around and see some of the new care that have come out since I left the States. I noticed an add in a magazine the other day that interested me very much. It was a new car called the “Spitandkick” Twin Eight. The add said; Just throttle the car down and see the old men with canes whiz by. And it rides like a pond lily on a quiet lake. The add says they quit making windshields in 1914 owing to the fact they could find no glass to withstand the wind pressure when the car was driven at high speed. They inserted a letter from the promanent film star, Douglas Chapbanks saying: “My car is a wonder. I lash the steering wheel with a rope and climb out on the hood and play my banjo. It runs better in a cornfield that it does in the road.” Some car, what you think?

I read in the World Herald the other day that another cyclone visited your fair city. On Sunday evening again and almost the same time of year that the other one passed over. Well Dundee got the brunt of it this time and it was not as wild as the other one. Omaha seems to be a regular stopping point for these whirl winds.

Recently I have taken some 75 exposures with different kodacs, and up to time of going to press I have had “rotten luck” soda speak. I am convinced that the fault lies between the poor films, the lack of knowledge in developing, the poor print paperand the ignorance of the workman. Anyway I will bring the films back and let your trained eye rove over the result. I think with the proper care we could get a few good prints off of some of them. By the way; was there [crossed out: is] anything on the roll I sent you some time ago. Judging from the other films that I exposed with the same kodac, there was very little on them.

No I remember no girl by the name of Dessie Moore, and further more I have no desire for her aquaintance. If she is married that is her hard luck, for she ought to have known better. If she lived next to Tillie she had a good neighbor. I wonder if my likeness still adorns the Struppith household. I ceased corrosponding with the fair maiden several months ago, and she streightway got peeved and announced her intention to refrain from writing until she heard from me. So far she has proved to be truthful little girl, which is something to be prowd of. I trust that her aching heart has found solace in some other companion who will appreciate her worth. “Gas Alarm” Masks on.

Expect to be in the States about the middle of May, unless unforseen happens, Will write again before we leave Bitburg.

‹ Irene Donnelly to Private Charles Eggeling up Sergeant Clyde Eoff, to his sister Josephine Eoff, May 30, 1919 ›
Back to Top