The ‘Space Race,’ a key front in the Cold War between the United States and the Soviet Union, began after the Soviets launched the first manmade satellite, Sputnik into orbit around the Earth in 1957. The American effort to win the 'Space Race' with a successful human landing on the Moon began on May 25, 1961, with President Kennedy’s address to a joint session of Congress. The president’s address on “Urgent National Needs” highlighted a number of important national issues and laid out the main challenge for America’s manned space program.

“We go into space because whatever mankind must undertake, free men must fully share. I therefore ask the Congress…to provide the funds which are needed to meet the following national goals: First, I believe that this nation should commit itself to achieving the goal, before this decade is out, of landing a man on the moon and returning him safely to the earth.”

On July 20, 1969, Kennedy’s challenge became a reality when Apollo 11 astronauts Neil Armstrong and Buzz Aldrin walked on the surface of the Moon. The American space program was just getting warmed up as the Apollo 11 astronauts took mankind’s first steps on another celestial body. The lessons learned and the technology advanced by the Apollo missions pushed NASA forward to tackle new challenges in the decades following the Apollo Moon landings.

To commemorate the fortieth anniversary of the Apollo 11 Moon landing, the National Postal Museum, in partnership with the National Air and Space Museum, has created an online exhibit featuring space related objects from the collections of both museums. These objects highlight a narrative of NASA accomplishments leading up to the Moon landing and beyond. 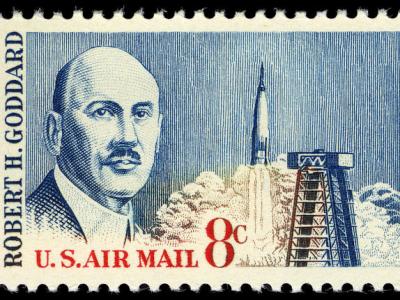 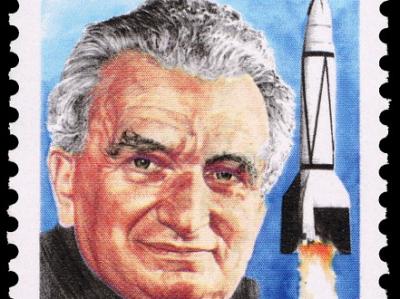 Kennedy Pushes America to the Moon
‹ One Giant Leap for Mankind up Robert Goddard, Father of Rocketry ›
Back to Top