Man's First Trip to the Moon

Following a tragic fire that resulted in the deaths of the three Apollo I astronauts on the launch pad during a preflight test in early 1967, NASA conducted a number of unmanned Apollo flights to test new equipment and the new Saturn V rocket. The Saturn V carried the first three-person crew into space with the Apollo 7 mission.

The Apollo 8 mission tested all of NASA’s preparations by traveling to the Moon and back. As Apollo 8 circled the Moon on Christmas Eve 1968, the astronauts on board read the first ten lines of the Book of Genesis to a massive worldwide television audience. The words of these men who were flying hundreds of thousands of miles from home had a tremendous emotional impact on worldwide audiences.

Postmaster General W. Marvin Watson, inspired by Apollo 8’s success, supported the idea of producing a stamp commemorating the voyage. The Post Office Department selected NASA’s color photograph 68-HC-870 for the 6-cent stamp design. This picture, which was taken on the mission while the men were approximately 240,000 miles from Earth, shows the moon’s surface with the Earth in the distance. The stamp featured the words “In the beginning God…”, the first words of Genesis that had been read by the astronauts.

Originally, the stamp designers considered using the phrase, “And God saw that it was good,” but removed it for fear of aggravating religious groups. Ironically, the removal of these words angered some, including Rev. Carl McIntire, a fundamentalist radio preacher. He believed that the words “In the beginning God…” had been removed from the stamp and he persuaded his followers to write to the White House asking for the words to be added back. After countless letters, the designers decided to place the words “In the beginning God…” onto the final stamp design. The lawyers from the Post Office Department feared a legal battle would ensue. However, nothing developed and the stamp was issued on May 5, 1969. 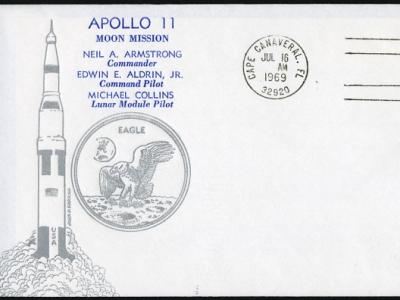 The Lead Up to a Lunar Landing

Learn more About The Lead Up to a Lunar Landing