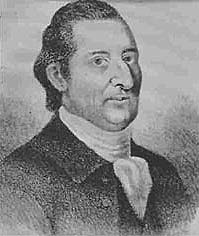 William Goddard was an ex-postmaster from Providence, Rhode Island who developed the Constitutional Post as an alternative to the British run Parliamentary Post. To Goddard, the Parliamentary Post was unacceptable because it was not private—postmasters were allowed to intercept and open letters—and because he saw it as another form of taxation without the colonists’ consent. Increasing numbers of colonists also felt this way and the Constitutional Post proved quite popular as a way of rejecting British rule.

The New York Gazette on the establishment of the Constitutional Post:

How cheerfully will every well wisher to his Country lay hold of the Opportunity to rescue the Channel of Public and Private Intelligence out of the Hands of a Power, openly inimical to its Rights and Liberties.

The Constitutional Post, as conceived by Goddard, lasted from 1774 until July 25, 1775 when administration of the Constitutional Post passed to the Second Continental Congress who appointed Benjamin Franklin as its first postmaster, a decision that deeply disappointed Goddard. He was appointed Riding Surveyor of the Post.