Because the way people write has changed so much over time, the handwriting in old letters, such as those in Out of the Mails, can be difficult to read. The skill of reading earlier styles of handwriting is called paleography. As you attempt to decipher the following words, keep in mind that spellings were not standardized during the colonial period, so you may have to do some creative thinking to figure out the word the writer was using!

This word comes from Thomas Pownall's letter to John Hancock (The franking privilege). Can you guess what it is?

Answer: Did you guess "possible"? If so, you are exactly right! The letter 's' used to be written in two different ways: one the way we write it now (the fourth letter), and another way that looked like an 'f' (the third letter).

Aside from differences in lettering, the authors of the letters in Out of the Mails also had different styles of abbreviation. Usually abbreviated words were written like this word, with the last letter or two in superscript. What do you think this abbreviation is?

Answer: This is an abbreviation for 'favor' and can be found in several of our letters. A favor usually meant another letter.

This word comes from Nathanael Greene's letter to Joseph Webb Jr. (The Mails during War). Remembering what you've learned about the different ways letters can be written, can you figure it out?

Answer: It's "Matrasses," or as it would be spelled today, "mattresses." Aside from writing their letters differently, people in Greene's time often spelled things in different ways. Spelling was first standardized by Noah Webster in Webster's Dictionary, published in 1828.

In addition to differences in lettering and spelling, people in the colonial period often capitalized words unlike we do today. With that in mind, can you guess this word?

Answer: This word is "Enemy." At the time there were many different handwriting "schools," each with its own method of teaching students to write. Apart from individual differences in handwriting, those people who learned different methods of writing may have very dissimilar styles.

One of the best ways to figure out especially difficult words is through context by reading the rest of the sentence surrounding the word. To figure this one out you'll probably need its context: "...the postage of letters [will] be double the Sums [ ____ ] before the Commencement of the present war."

Answer: This word is "paid"! The context should have helped you figure it out. Remember that the way people speak and write has changed over time, so some phrases may be unfamiliar, and context may not always help on its own. 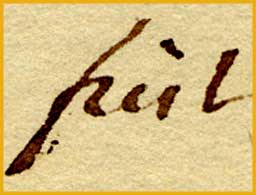 To figure this word out we had to look at the rest of the letter to see how the writer formed his letters. We noticed that he often dotted his i's to the right, and, like many writers, didn't always cross his 't's. With those hints can you guess this word?

Answer: This was one of the more difficult words to transcribe for Out of the Mails, but with a little work, we realized it was "first." Did you figure it out? The dot for the 'i' is above the 's' and the 't' doesn't have its cross.

Literary Arts
‹ Just for Kids! up Create Your Own Loyalist Seal ›
Back to Top