Mrs. Mary Hopkinson was the widow of one of Benjamin Franklin’s good friends, Thomas Hopkinson, founder of the Academy of Philadelphia (now the University of Philadelphia). The content of the letter is entirely personal: Franklin congratulates Mrs. Hopkinson on her daughter Mary’s marriage to Dr. John Morgan in September 1765 and praises Dr. Morgan’s book, Discourse on the Institution of Medical Schools in America. Franklin sent this letter during his second diplomatic mission in London which lasted 11 years beginning in 1764.

As a diplomat, Franklin was often accused by both sides as being partisan against their interests – too “British” for the Americans and too “American” for the British. He shows his revolutionary spirit here by transposing his usual frank and signing the cover “B Free Franklin.”

A red circular “FREE” hand stamp allowed this letter to travel without charge by packet ship to New York City, where it was carried by post to Philadelphia. Postal packet ships sailed once a month between Cornwall, England, and New York City.

Cover of a letter from Benjamin Franklin to Mrs. Hopkinson, 1766 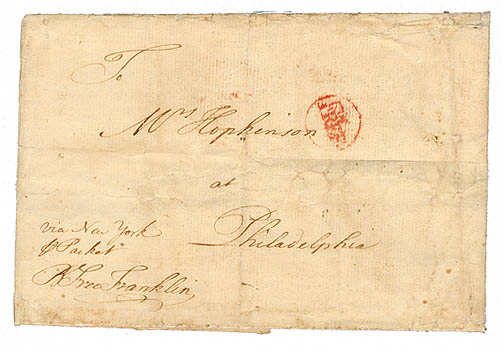 I received your Favour of Oct. 1 with the order on Mr. Barclay, of which I have not yet made any Use, but shall when I next see him; Tho’ it was not necessary for you to take Notice of those small expences ‘till my return. ~ Your Acknowledgments are far beyond Expression and bring me in your debt. I had a pleasure in the Success of my Endeavours, that sufficiently repaid me for the little Trouble they gave me. Pray present my Respects for your new Son-in-law Dr. Morgan, whose letters I have receiv’d but cannot now write to him. I thank him for his Book, which is well spoken of here. I congratulate him and you on his marriage, and wish for you and your whole Family all Sorts of Prosperity. Being with sincerest Esteem and Respect,