Thomas Pownall (1722-1805) first visited the colonies in 1754, and it was on this tour that he met and became friends with Benjamin Franklin. Pownall held many political positions, including Lieutenant Governor of New Jersey and Governor of Massachusetts. Similar to many leaders in the colonies, he was a political moderate who believed that unity and federation between Britain and the colonies was vital in securing the empire. He believed in offering the colonies full rights of self-governance, subject to the King: “…the crown cannot establish any colony upon – or contract it within a narrower scale than the subject is entitled to, by the great charter of England,” he wrote in his Administration of the Colonies. Frustrated by the state of colonial politics, Pownall returned to England in 1760. Franklin was a frequent visitor to his London household.

In this letter, sent on Pownall’s behalf by Franklin, Pownall writes to John Hancock, whose uncle, Thomas Hancock, had control of nearly ₤5000 of Pownall’s money for use in speculative business ventures. In this letter, which traveled by private ship from London to Philadelphia where it was then carried to Boston, Pownall asks Hancock to send him a statement of his account so that Pownall may repay money he had borrowed from Hancock’s late uncle.

Cover of a letter from Thomas Pownall to John Hancock, 1765 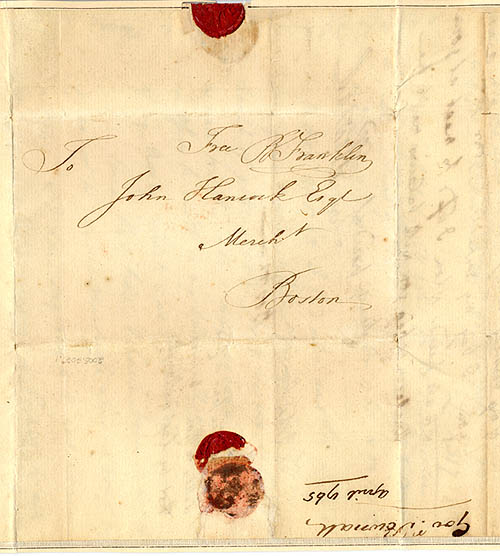 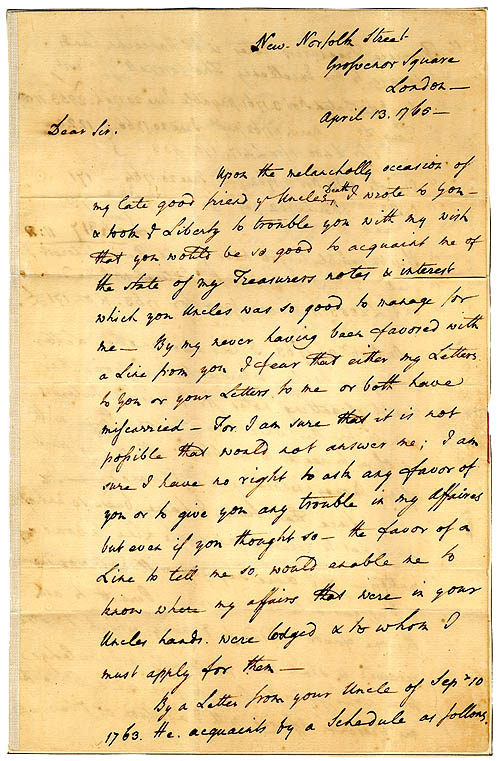 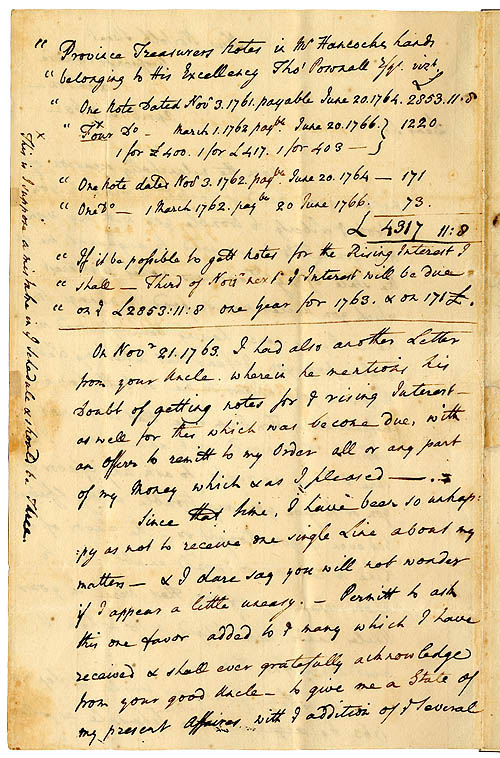 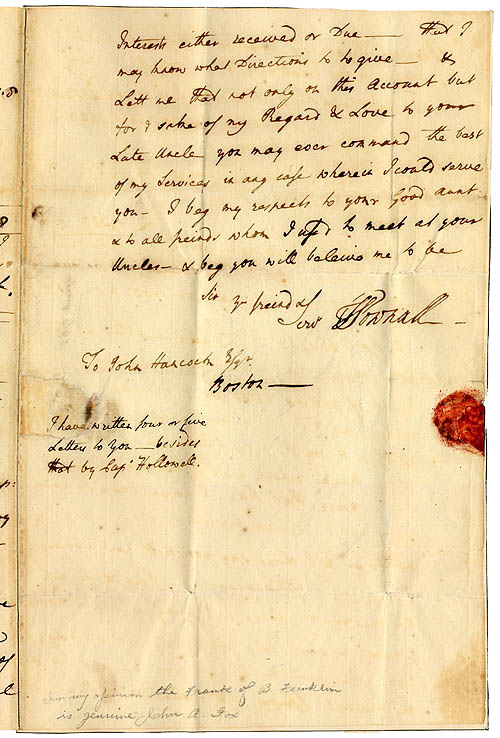 Upon the melancholly occasion of
my late good friend yr uncles^ Death I wrote to you –
& took t[he] Liberty to trouble you with my wish
that you would be so good to acquaint me of
the state of my Treasurers notes & interest
which you r Uncle s was so good to manage for for
me __ By my never having been favored with
a Line from you , I & fear that either my Letters
to you or your Letters to me or both have
been miscarried__ For I am sure that it is not
possible that would not answer me; I am
sure I have no right to ask any favor of
you or to give you any trouble in my affaires
but even if you thought so__ the favor of a
Line to tell me so would enable me to
know where my affairs that were in your
Uncles hands were lodged & to whom I
must apply for them_

On Novr 21. 1763 I had also another Letter
from your Uncle. wherein he mentions his
Doubt of getting notes for t[he] rising Interest –
as well for this which was become due, with
an offerr to remitt to my Order all or any part
of my Money which & as I pleased__.
Since that time, I have been so unhap
py as not to receive one a single Line about my
matters__ & I dare say you will not wonder
if I appear a little uneasy. __ Permitt to ask
this one favor added to t[he] many which I have
received & shall ever gratefully acknowledge
from your good Uncle__ to give me a State of
my present affaires with t[he] addition of the several

† This is I Suppose a mistake in t[he] Schedule & should be Three.

I have written four or five
Letters to You__ besides
that by Capt Hollowell.

‹ The Franking Privilege up John Hancock ›
Back to Top