George Washington as a Private Citizen 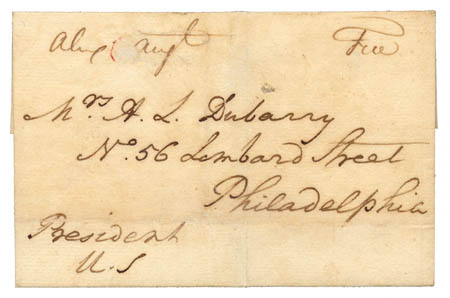 Cover of a letter from George Washington to Mrs A.L. Dubarry

On April 28, 1784, the franking privilege was extended to George Washington as a private citizen, an extremely uncommon practice. However, when Washington franked this cover he did so not as a private citizen, but as the holder of a government office: “President U.S.” The franking privilege was not formally extended to the executive branch of the new government until February 20, 1792—seven months after Washington posted this letter.

‹ Benjamin Franklin, Diplomat up The Mails During War ›
Back to Top