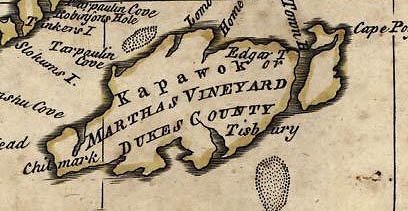 Martha’s Vineyard was populated by a mix of revolutionaries and loyalists during the war. Although there were 600 men in the local militia out of a total population of 3,300, many of them were fishermen and unavailable to serve for months out of the year. Vineyarders were very much aware of the island’s vulnerability to British attack. This informed their political positions to some degree.