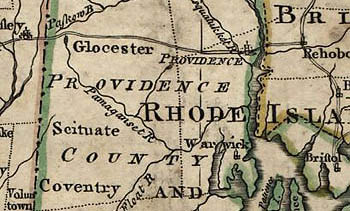 Shipbuilding was the main industry in Providence at the time Henry Lloyd wrote his letter. A port city, Providence had also been a key link in the North Atlantic slave trade. However, passage of slaves through the port had been outlawed one year previously. In the build up to the war, Rhode Island was quick to declare its independence from British rule doing so May 4, 1776, two months before the Declaration of Independence was signed in Philadelphia.