Major General Nathanael Greene came from a Quaker family, but his interest in military affairs and strategy resulted in his expulsion from the pacifist religion. Greene went on to become one of Washington’s most trusted generals and a highly gifted military strategist.

When the situation at Camp Valley Forge became desperate, it was Washington himself who appealed to Greene and urged him to take on the role of Quartermaster General. Similar to many other officers, Greene did not want to be taken away from the field. His acceptance of the position was conditional: he wanted to retain the ability to command in the field and he wanted to hand-select his two top assistants.

Greene successfully reorganized the Quartermaster Department, but resigned his post in 1780 after a long struggle with Congress over Congressional commissions and the interference of the Treasury Board in army administration.

In this letter, Greene writes to Joseph Webb Jr., a successful shopkeeper and trader in Wethersfield, CT, to inquire about supplies for the army. The letter most likely traveled on a westerly route, starting in Valley Forge, heading north to Easton, Pennsylvania on the Delaware River, and continuing northeast to Fishkill, New York, and finally through Hartford, Connecticut, only three miles north of Wethersfield.

On the cover Greene exercised his franking privilege by writing “On publick Service,” a phrase typically used by military officers, and his name “N. Greene.”

Cover for a letter from Nathanael Greene to Joseph Webb Jr., 1778 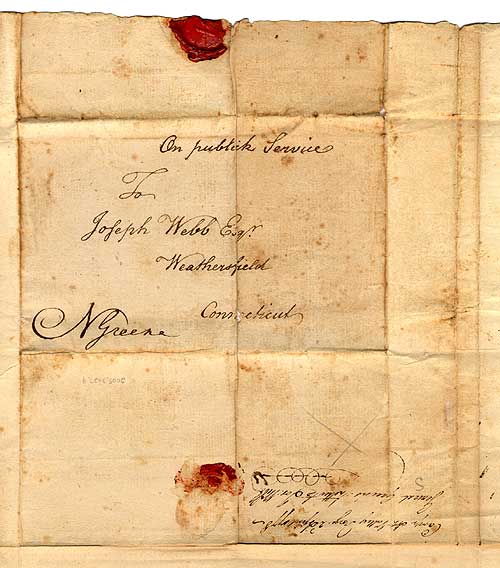 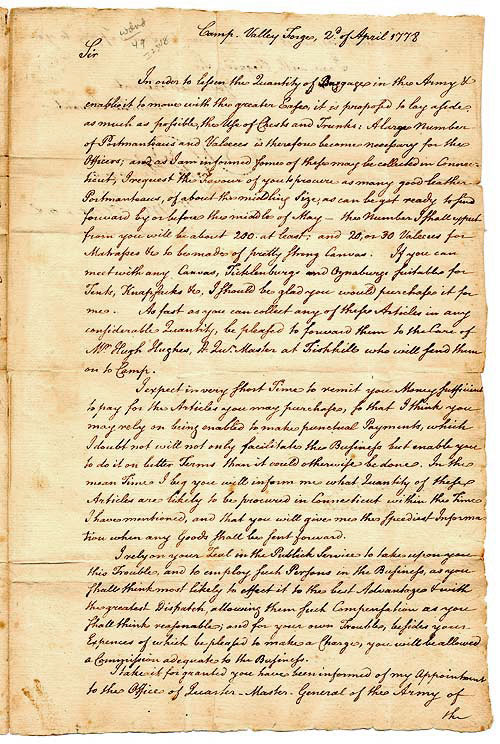 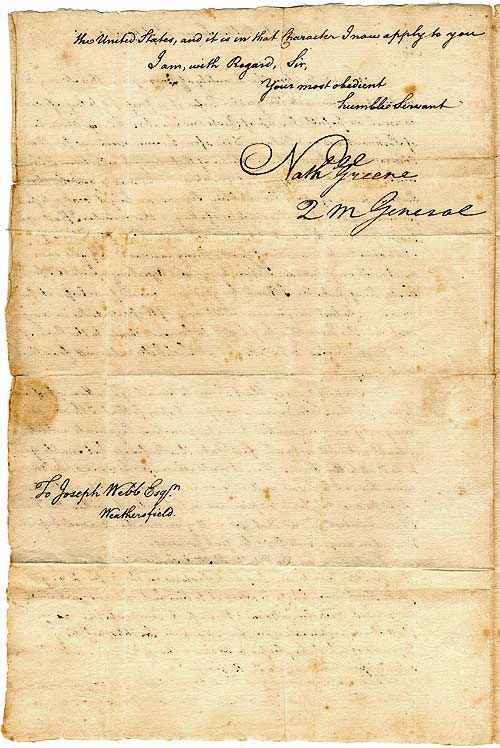 Sir
In order to lessen the Quantity of Baggage in the Army &
enable it to move with the greater Ease, it is proposed to lay aside.
as much as possible, the Use of Chests and Trunks: A large Number
of Portmanteaus and Valeeses is therefore become necessary for the
Officers; and as I am informed some of these may be collected in Connec-
ticut, I request the Favour of you to procure as many good leather
Portmanteaus, of about the middling Size, as can be got ready to send
forward by or before the middle of May—the Number I shall expect
from you will be about 200. at least; and 20, or 30 Valeeses for
Matrasses to be made of pretty strong Canvas. If you can
meet with any Canvas, Ticklenburgs* and Oznaburgs** suitable for
Tents, Knapsacks &c, I should be glad you would purchase it for
me. As fast as you can collect any of these Articles in any
considerable Quantity, be pleased to forward them to the Care of
Mr. Hugh Hughes, D. Qur. Master at Fishkill who will send them
on to Camp.
I expect in very short Time to remit you Money sufficient
to pay for the Articles you may purchase, so that I think you
may rely on being enabled to make punctual Payments, which
I doubt not will not only facilitate the Business but enable you
to do it on better Terms than it could otherwise be done. In the
mean Time I beg you will inform me what Quantity of these
articles are likely to be procured in Connecticut within the Time
I have mentioned, and that you will give me the speediest Informa -
tion when any Goods shall be sent forward.
I rely on your Zeal in the Publick Service to take upon you
this Trouble, and to employ such Persons in the Business, as you
shall think most likely to effect it to the best Advantage & with
the greatest Dispatch, allowing them such Compensation as you
shall think reasonable; and for your own Troubles, besides your
Expences of which be pleased to make a Charge, you will be allowed
a Commission adequate to the Business.
I take it for granted you have been informed of my Appointment
to the Office of Quarter-Master-General of the Army of
the
the [sic] United States, and it is in that Character I now apply to you.
I am, with Regard, Sir,
Your most obedient
humble Servant
Nathel Greene
Q M General

*Ticklenburgs: A coarse fabric made from mixed linen that was manufactured to be sold in the West Indies.

**Oznaburgs: Now spelled "osnaburg." A plain, coarse fabric made from flax or jute. It was manufactured in Scotland, possibly intended to imitate a German import, and exported primarily to England, the Netherlands, and the American colonies.