During 1775, Boston was a dangerous place for loyalists. The destruction of 342 chests of tea in December 1773 provoked Parliament to pass what the colonists called the “Intolerable Acts” including the closure of Boston Harbor in 1774. Firmly under British control, the city was regarded as a haven for loyalists, but life in Boston was difficult. Food supplies were inadequate and, in many cases, residents had to rely on British military stores in order to feed themselves. This, combined with a constant fear of attack by revolutionary forces, led many residents to leave the city. By mid-July 1775, only one third of the city’s residents remained.

Henry Lloyd, a loyalist merchant prominent in Boston society, often traded on behalf of Oliver DeLancey and John Watts, two wealthy and powerful merchants from New York City. At the time this letter was written, Lloyd had already experienced loss directly related to the revolutionaries. On March 7, 1774 during the lesser-known Second Boston Tea Party, a group of people dressed as Mohawk Indians boarded a ship in Boston Harbor and destroyed 28 chests of tea, 16 of which were consigned to Lloyd. In this letter, Lloyd reports on the difficulty of obtaining supplies and the insecure state of the mails. At this time there were two competing postal systems – the British Parliamentary Post and the American Constitutional Post. In this period of unsettlement, interception and opening of mail by both British and revolutionary forces was common.

Lloyd’s letter reveals an attempt to bypass revolutionary interference by sending his letter out of the mails with a private carrier to Providence, Rhode Island where it was posted. A black two line hand stamp “Providence/May 5” is the only known example of the postmark. Explore below for more details, or create your own loyalist seal!

Cover of a letter from Henry Lloyd to Messrs. Delancy and Watts, 1775 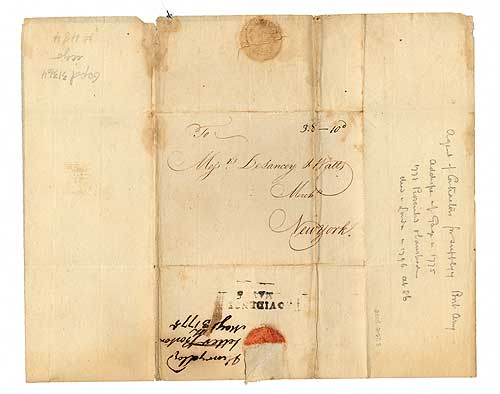 Letter from Henry Lloyd to Messrs. Delancy and Watts, 1775 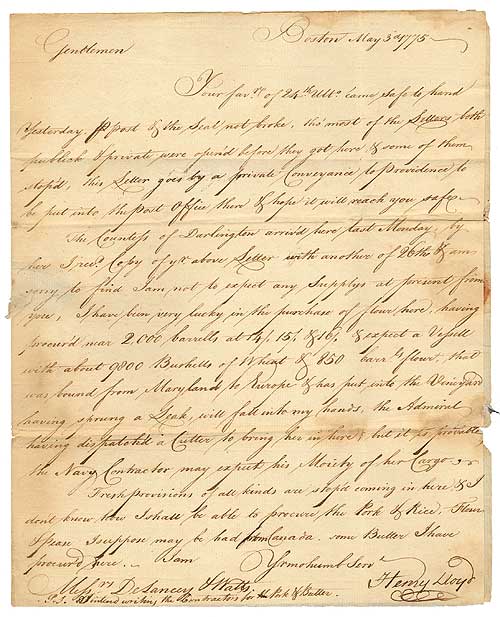 Gentlemen
Your fav.r of 24th Ult.o came safe to hand
Yesterday. Per Post & the Seal not broke, tho’ most of the Letters both
publick & private were open’d before they got here & some of them
stop’d, this Letter goes by a private Conveyance to Providence to
be put into the Post Office there & hope it will reach you safe.
The Countess of Darlington arriv’d here last Monday, by
her I recd. Copy of yr. above Letter with another of 26th & am
sorry to find I am not to expect any Supplys at present from
you, I have been very lucky in the purchase of flour here, having
procur’d near 2,000 barrells at 14/.15/. & 16/. & expect a Vessell
with about 9800 Bushells of Wheat & 850 barrls. flour, that
was bound from Maryland to Europe & has put into the Vineyard
having sprung a Leak, will fall into my hands, the Admiral
having dispatch’d a Cutter to bring her in here, but it is probable
the Navy Contractor may expect his Moiety* of her Cargo.
Fresh provisions of all kinds are stop’d coming in here, & I
don’t know how I shall be able to procure the Pork & Rice, Flour,
& Pease I suppose may be had from Canada, some Butter I have
procur’d here. I am Yr mo humb Serv

Messrs. DeLancey & Watts.
P.S. I intend writing the Contractors for the Pork & Butter.

‹ The Mails During War up Oliver DeLancey ›
Back to Top