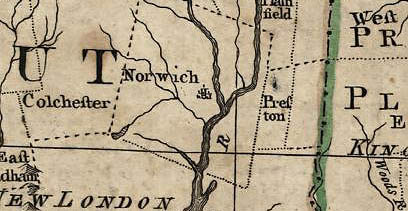 Connecticut experienced some geographically-based tensions as towns in the eastern part of the state, such as Norwich, often lashed out at western towns for their perceived loyalist leanings. Norwich’s independence-minded stance as well as its geographical location, made it vulnerable to British attack.

The year 1781 was a particularly difficult one, as Connecticut’s resources were stretched thin and the state was not supplying adequate food, clothing, or pay for the army. These constant material demands would leave Connecticut virtually impoverished by the end of the war.

‹ Dudley Woodbridge up Williams Letter, 1785 ›
Back to Top